People say ill-health is the worst thing that can happen to you. But in my opinion, worse than losing your own health is the experience of watching your loved one suffer. 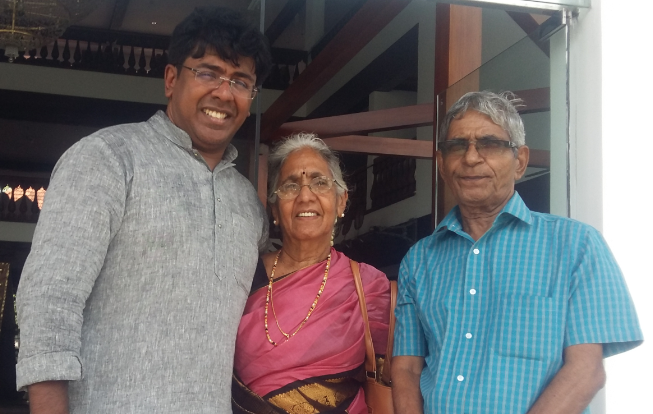 Back in November 2018, my dad had developed a cough, accompanied by a sore throat. His voice had changed slightly. These are symptoms of the flu that all of us face regularly. So, we did not suspect anything worse. After two weeks, the cough did not subside. We consulted another doctor. This time, we suspected tuberculosis because the scan showed a few black spots on his lungs. We started him on medication for tuberculosis.

I was working in Bangalore at that time and my parents were living in Thrissur, a city in Kerala. Dad and I would talk over the phone daily. He began to lose his voice and phone conversations became difficult. Even with all the medication, his condition did not show any improvement. We consulted more doctors. A few throat exercises were suggested, but even these did not help. His voice became feebler. Then, it was detected that one of his vocal cords was paralysed. Up until January 2019, in spite of numerous doctor visits, we still did not know what he was actually suffering from.

In February this year, we visited yet another doctor in the capital city, Thiruvananthapuram, who advised a biopsy. Intuitively, he realised what the problem was but wanted to see the reports before confirming anything to us. The biopsy reports came and the doctor explained them to me in simple terms. My father had lung cancer. This was the first time that word was used in relation to my father. The news left me numb. I immediately decided to quit my job to care for my dad.

I spoke to a few of my friends. One of them who is a doctor, sent me a link to Onco.com. That’s how Aman, a care manager from Onco.com, got in touch with us. She suggested where we could find the best treatment for my dad. But we decided that we did not want to change the course of treatment at that point. My dad was very reluctant to visit hospitals and take medication. We did not want to make decisions about his treatment without his consent.

It was a struggle to get him to even take his regular meals. Persistent cough and pain had made him very irritable. He did not want to meet anyone or go anywhere. Aman stayed in touch with us at every point, checking to see what measures we were taking and advising us further.

By the end of February, my father had to be hospitalised. He was having trouble breathing and swallowing. Tubes had to be inserted to help feed him. He became extremely weak and bed-ridden. My mother and I took turns to stay with him at the hospital. The most difficult part was watching him struggle. The treatment did not seem to be working as the cancer was very advanced by now. On one instance, the doctors had to inject medication into his neck as they could no longer find the veins in his arms. It was a painful process for him and for us to watch him. We decided that we would bring him home as we could not see him suffer in this manner.

Once we brought him home, we knew that it was just a matter of time before things reached their natural conclusion. He was refusing to take feeds and all medication. We just spend our last moments with him knowing that there was nothing more we or anyone else could do for him.

As a caregiver, there can be an overwhelming sense of guilt within you, when a treatment doesn’t work. You wonder if the situation would have been better if you had noticed the signs of cancer earlier. You may even blame yourself for not choosing the right doctor or the right hospital. No matter how hard you try to make the patient comfortable, you feel you could have done better. This is something I have had to come to terms with. A part of this journey was the realisation that sometimes things are beyond our control. At such times, we need to be able to accept the situation, rather than live in regret.

From my experience, I have learnt that we should listen to the patient more. When they tell us that the pain is severe, or that the medications are not helping them, we need to take their opinion seriously. I urge medical practitioners to empathise with their patients. Very often, when you deal with patients every day, over time you lose the sensitivity required when speaking with patients, as the behaviour of medical practitioners can have a huge impact on the patients, and the caregivers who look up to them.

Since my father passed away, I have been attending ‘Talk Your Heart Out’ (TYHO) gatherings whenever I can. This is an initiative by Onco.com to bring together people who have been affected by cancer in any way. When I go to these meetings, I take along something new; a new perspective, a piece of research, or anything positive I share these with the others who have come to the meeting. I believe that an important part of our role as caregivers is to keep the patient motivated to keep fighting against cancer. Maybe that is where I failed with my father. He had given up and I didn’t know how to encourage him sufficiently. So now, I help other caregivers and cancer patients understand the importance of staying positive during the fight.

As a caregiver, speak with the patient about the new treatments that are coming up. Give them the hope that one of these treatments will definitely work for them. Read out news articles on cancer research, it helps. If you stay positive, maybe they will follow suit. Talk about things that they will do once the treatment is complete. Make plans for the future. Help them believe that they will recover and that there are many more things for them to do post treatment.