Lung cancer is one of the leading causes of cancers in India today. Much is spoken about the condition, the diagnosis, the prognosis, the risk factors, treatment options and ways of prevention and yet, some questions still remain unanswered about lung cancer. 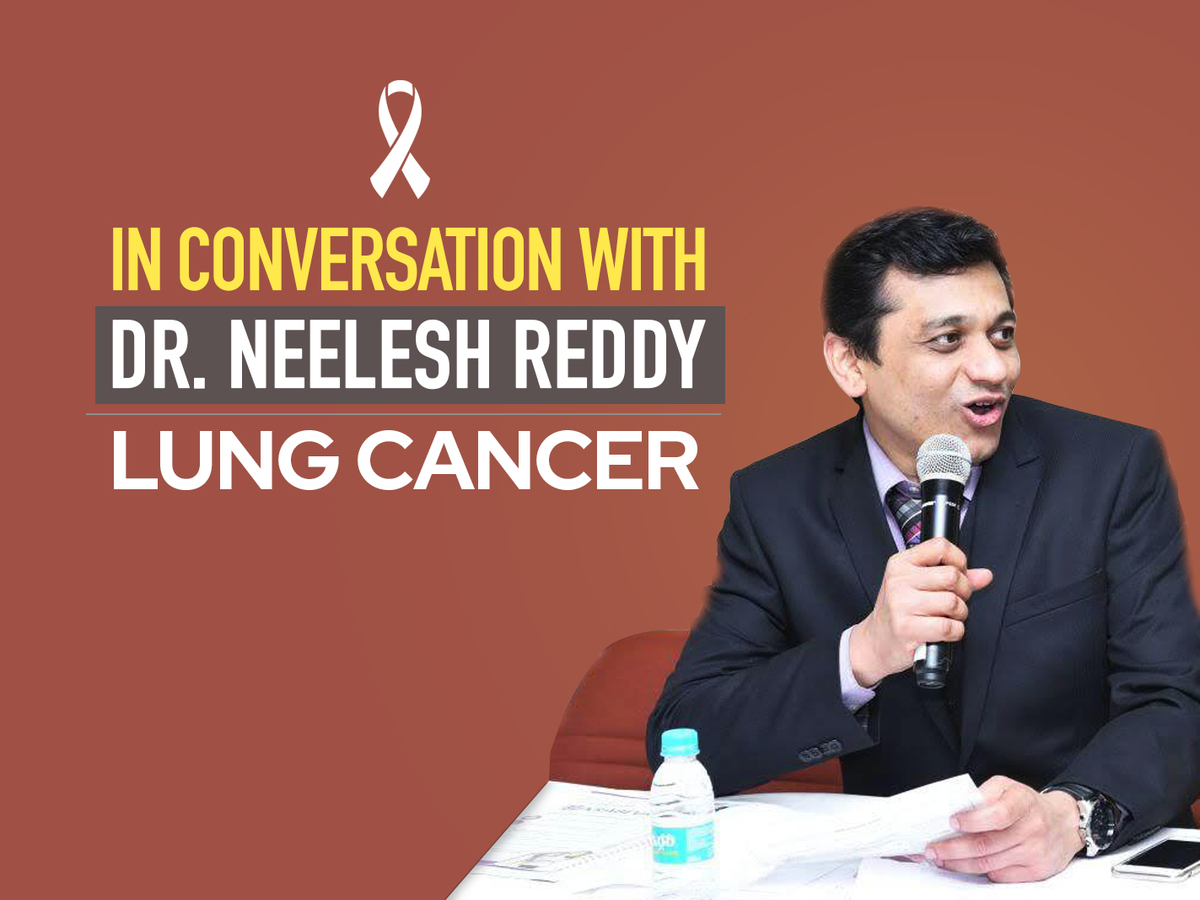 Dr. Neelesh Reddy is a senior medical oncologist at Columbia Asia hospital in Bengaluru, takes us through the different aspects of the illness that are important for us to know. Dr. Reddy brings fifteen years of experience in the medical field, having started his career at AIIMS New Delhi, and has since worked with leading names in the healthcare industry such as HCG, Bangalore and Apollo Speciality Hospital, Chennai.

What are the different symptoms that are associated with lung cancer?

The symptoms of any cancer depend upon which organ or organs are affected. Obviously, as the name indicates, lung cancer begins in a lung. If the disease is predominantly present only in the lung, then you will see symptoms like difficulty in breathing, change in voice, which we call hoarseness of voice, cough and exertional difficulty, which means that the patient’s stamina has reduced.

Lung cancer is the second most common type of cancer in India, especially in men. It is more prevalent in men than in women. What could be the reason for this?

Lung cancer is the second most common cancer in India, but it is the most common cause of cancer-related death both among men and women. It is a common type of cancer in India, not just among men but also among women. But what is the reason for it being more prevalent among men? The answer can be found in the risk factors for lung cancer. One of the biggest risk factors for lung cancer is smoking, and smoking is far more common among men than among women. Hence the incidence of cancer in men  is higher.

Having said that, it is not a gender specific disease. Women also face the risk of developing lung cancer. In fact, studies show that for the same amount of tobacco smoked by women and men, women are at higher risk of developing cancer, due to the presence of the hormone Estrogen, which enhances the toxic effects of tobacco.

How can we know if someone is at a higher risk of developing lung cancer?

A combination of factors like smoking and alcohol, or smoking and environmental smoke, could further increase the risk of lung cancer.

What steps should a former smoker take to prevent lung cancer?

I would like to congratulate the people who have quit smoking. They have managed to remove an important risk factor from their lifestyle. Having said that, once you stop smoking, a reduction in the risk of lung cancer happens over several years and not overnight. Though other benefits of quitting smoking start early, like a reduced risk of heart diseases or nervous system related diseases. But cancer related risk remains the same for upto five years. After ten to fifteen years of not smoking, the risk reduces drastically.

So, what can former smokers do to prevent lung cancer? They should be aware of the symptoms of lung cancer, so that they can be checked as soon as they appear. Timely diagnosis and treatment can greatly improve their chances of cure. If they notice a change in their voice, or if they have a cough that lasts for over three weeks, or if they have lost ten percent of their body weight within six months without trying to lose weight, then they should consult a doctor.

The nature of the disease is such that it cannot be detected at an early stage. Sometimes, when people go for a full body check up for an insurance policy or for travelling to another country, then the tests end up detecting lung cancer in the early stages.

There have been several studies conducted to find a way to detect lung cancer early. Some studies used x-rays, others used sputum testing, but none of the studies were able to detect cancer in the early stage. Recently it has been observed that people who have been smokers for twenty to thirty years, can take the help of low dose CT scans to detect lung cancer in the early stages. Consequently, with surgery, their chance of recovery can be improved significantly.

We have been hearing so much about the air situation in Delhi. Air pollution is a major concern in many other cities too. What significance does it hold in relation to lung cancer?

Air pollution can increase the risk of lung cancer but the proportion of risk varies from individual to individual. For example, if someone is already a heavy smoker, then air pollution will have a significant impact on their lungs. People who work in environments that exposes them to petroleum, asbestos or paints for prolonged periods of time, run a higher risk of developing cancer. So air pollution will further increase the risk in such people, when compared to those who have no exposure to such chemicals or to tobacco smoke.

Having said that, air pollution is not healthy and should be avoided as it contributes in some way to the risk of lung cancer.

In cities, people cannot avoid exposure to air pollution. What can be done to minimise this risk?

Research has not found any significant association between the use of masks and a reduced risk of lung cancer. So, what else can we do? It cannot be just an individual’s effort, as a collective effort is required to reduce air pollution. At the individual level, we can avoid smoking, we can use public transport and electrical transport to do our bit to reduce air pollution.

In what ways can we reduce indoor pollution in our homes?

Indoor pollution can be of two types. The first one comes from burning coal or wood for cooking. This affects the lungs of the person who is cooking and long term exposure leads to emphysema or COPD (Chronic Obstructive Pulmonary Disease) which increase the risk of lung cancer. This type of indoor pollution has been eliminated to a large extent as most people have stopped using coal and wood for cooking.

The other form of indoor pollution is radon, which comes from the decay of uranium and radium. If the building materials used in the construction of the house have been extracted from mines, there could be high levels of radon indoors. People living in such properties should avoid spending too much time indoors. Going for morning walks or jogs can help them reduce the harmful effects of radon. Those who work usually spend most of the day at their workplace, so this reduces their exposure to radon within their house.

Cancer has the reputation of being unbearably painful. What advice would you give to cancer patients and caregivers who are experiencing this?

It is true that cancer is painful but that is not the complete truth. Cancer is painful only for the terminally ill. There can be several patients of cancer who go through different stages and it does not have to be painful for most of them. Cancer is associated with death, and a painful death. This is a myth. Now-a-days, we have several treatments apart from the conventional ones such as robotic treatments, LINAC radiation treatments, cyber knife, etc that do not have to be painful. And the side effects from newer treatments are far less when compared to the more conventional treatments like chemotherapy.

However, pain is experienced by patients who are at an advanced stage of cancer. But in India, medicines like Morphine and Fentanyl are easily available, when compared to Western countries. Due to this, pain management has become easy and many patients who are terminally ill can live a relatively pain-free life.

What are some of the new treatments available for lung cancer?

In the early stages of cancer, we usually opt for surgery, followed by chemotherapy, for a higher chance of cure. Here ‘cure’ means that the patient will have the same life expectancy that they would have had without the incidence of cancer. At stage three or four, where surgery is relatively difficult to perform, chemotherapy and radiation therapy are used. Now, there are many additional options like targeted therapy, through which the patient can lead a normal life for two or even three years.

Are such advanced therapies available in India?

Yes, not only are they available in India, but they are available at a fraction of the cost compared to Western countries.

How harmful are vaping and e-cigarettes?

The government has banned e-cigarettes. There are certain advantages and disadvantages of this ban. On the positive side, e-cigarettes are a form of addiction and may lead to heart problems. So banning them is a positive thing. On the negative side, people who might have been using e-cigarette may go back to smoking tobacco, which is a carcinogenic substance and should be avoided.

Research has not shown any link between e-cigarettes and lung cancer.

What measures would you suggest for the rehabilitation of those who have suffered lung cancer?

Caregivers also go through a similar journey as the cancer patient, maybe not in the physical aspects but in all other aspects. How can we make it easier for them?

Previously, in our country, we lived in joint families. So, when one person fell sick, the others shared the responsibility together. The strain did not fall on a single person. But in nuclear families, it is more difficult. Caregivers can form groups to find unique solutions for their problems. At this point in time, the situation is not great for caregivers, it needs to improve.