Two Stars We Lost to Cancer

Celebrities are an important part of pop culture. They influence how all of us think, what we talk about, our tastes and our knowledge-base. In that sense, they play the role of catalysts in any social change that occurs in the world today. This is probably why the recent news of the demise of two film stars is so important, particularly for a cause like cancer awareness. Overnight, there was a spike in the number of posts, tweets and videos around cancer. While a large section of the population mourned the loss of two extremely talented individuals, their conversations also touched upon cancer research, symptoms to watch out for and treatment options available to us. 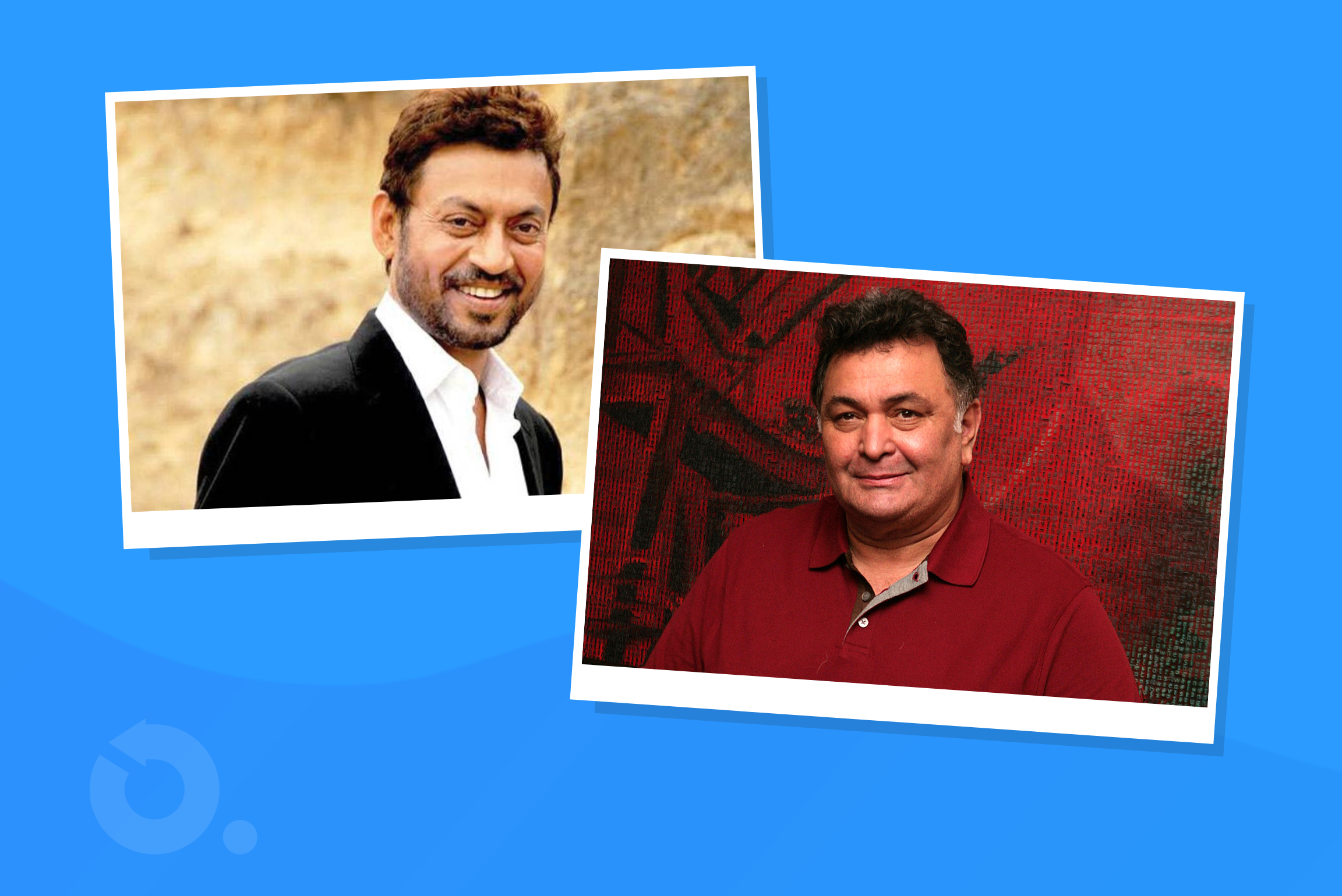 Irrfan Khan and Rishi Kapoor, the two stalwarts who passed away in the month of April this year, had very different career paths. Irrfan khan was an ‘outsider’ to the film industry, who made his debut in a side-role in the movie Salaam Bombay in 1988. It took a decade of struggle for him to bag any noteworthy films. He rose to fame when he starred in a British film in 2001. Since then, he has delivered back-to-back hits in Hindi cinema, both commercially and critically. He has bagged numerous awards, including the Padma Shri in 2011. He is touted as one of India’s finest actors and is globally acclaimed for his talent.

Rishi Kapoor on the other hand, belonged to the first family of Indian Cinema. He began acting as a teenager and became the heart-throb of the nation in the 1970s. A string of commercially-successful romantic films and a large fan following ensured that he remained a leading actor for almost three decades. His popularity extended to European countries like Russia where he still enjoys a strong fan base.

While both actors worked in different kinds of cinema, they were both known for a natural style of acting and their popularity extended across generations. Their death caused a lot of interest in the disease they had both been battling for several years; cancer.

On 29 April, Irrfan Khan breathed his last at Kokilaben Dhirubhai Hospital in Mumbai. He was taken there, after he developed an infection in his colon. He had been suffering from neuroendocrine tumour since February 2018. He had travelled to London to seek treatment for this rare type of tumour, and had tried to manage his acting career while still recovering from his illness. While no one, not even the stars, are immune to a tragedy like cancer, it is important to understand what each type of cancer entails and how we can detect them early in order to increase our chances of being treated successfully.

What is neuroendocrine tumour?

A neuroendocrine tumor (NET) begins in the specialized cells of the body’s neuroendocrine system. These cells have traits of both hormone-producing endocrine cells and nerve cells. Cells of the neuroendocrine system are found throughout the body, in different organs. While neuroendocrine tumours can develop in any part of the body, they are commonly seen in the, gastrointestinal tract, lung and the pancreas. The general symptoms of this type of cancer include unexplained weight loss, fatigue and loss of appetite. Depending on the size and the location of the tumour, other symptoms like pain, vomiting, diarrhea and skin rashes may also occur. Furthermore, due to the release of hormones, certain symptoms like diarrhea, flushing and other symptoms may be experienced.

If the doctor suspects that you have neuroendocrine tumour, you might be asked to undergo blood and urine tests to check for abnormal levels of hormones and other substances.A biopsy will be required to confirm the diagnosis of neuroendocrine tumour. To understand more about the stage of the tumour, further tests like ultrasound scan, CT scan, MRI, PET scan etc may be recommended.

The treatment for neuroendocrine tumour depends on the location, the stage, the grade, the overall health and the preferences of the patient. Surgeries are a common treatment modality, followed by somatostatin analogs, chemotherapy, immunotherapy, or targeted therapy.

Since the exact cause of the cancer cannot be determined, it is very difficult to completely prevent it. Sometimes, genetic factors could put you at risk for this type of cancer. Some conditions that affect the production of stomach acid like gastritis or pernicious anemia may increase the risk of developing stomach neuroendocrine tumour.

While Rishi Kapoor initially decided not to disclose that he was suffering from cancer, the rumours and fake news around his illness motivated him to come clean about it. This propelled open conversations around cancer in the media and among the general population as well. The actor confessed that he knew something was wrong when he began to lose weight quite rapidly, for inexplicable reasons. He lost 26 kg over four months. Unexplained weight loss should be treated as a concern and requires a consultation with a general physician.

After a two year struggle with cancer, and several rounds of treatment in New York, Rishi Kapoor was rushed to the hospital when he complained of difficulty with his breathing. He passed away on 30 April 2020, at the age of 67. Young and old mounted the loss of a superstar. Once again, in a span of 24 hours, the public conversation was focused on cancer.

Rishi Kapoor suffered from Acute Myeloid Leukemia (AML) which is a type of cancer that starts in the bone marrow, which is the spongy tissue inside our bones. Bone marrow is where new blood cells are formed. This type of cancer moves into the blood and can spread to other parts like lymph nodes, liver, spleen, brain and spinal cord. Most often, AML develops from cells that would turn into white blood cells (other than lymphocytes).

The risk of developing AML is higher among men and among smokers. Apart from smoking, exposure to certain chemicals like benzene also puts us at higher risk of AML. Benzene is mostly used in industries dealing with oil, rubber and shoe manufacturing. It is also found in motor vehicle exhausts.

Patients with AML generally present with symptoms related to complications of decrease in blood count (example, anemia, neutropenia-low WBC , and thrombocytopenia – low platelet), including weakness and easy fatigability due to anemia, infections of variable severity, due to low WBC and/or bleeding such as gingival bleeding, ecchymoses, epistaxis, or menorrhagia due to low platelet count. They most often present with general symptoms like fatigue, loss of weight and appetite.

If a doctor suspects leukemia, blood and bone marrow samples will be collected for further investigation. Spinal fluids may also be collected through a procedure called lumbar puncture. The most common treatments for AML involve chemotherapy, targeted therapy, and a stem cell transplant. A haemato oncologist will be involved in planning and executing the treatment plan.

While the film fraternity, mass media and movie-lovers pay their tributes to these two great stalwarts of the big screen, we also use the moment to spare a thought to the plight of cancer fighters everywhere. This is also a time to think about how awareness of the symptoms of cancer can help us detect cancer early. Early diagnosis and treatment greatly improve the chances for successful treatment. At this solemn moment, we hope that in the coming years cancer takes less lives, through increased early intervention and access to better treatment.

Impact of COVID-19 on the Treatment Decisions in Breast Cancer