Dr AMVR Narendra is currently senior consultant hematology, hemato oncologist & BMT at CARE Hospitals, Hyderabad. Formerly, he was senior medical oncologist at American Oncology Institute, Hyderabad. He has over 20 years of experience in the field of oncology and has three international and two publications in his name. In this interview, he discusses the frequently asked questions around Multiple Myeloma, a common type of blood cancer. 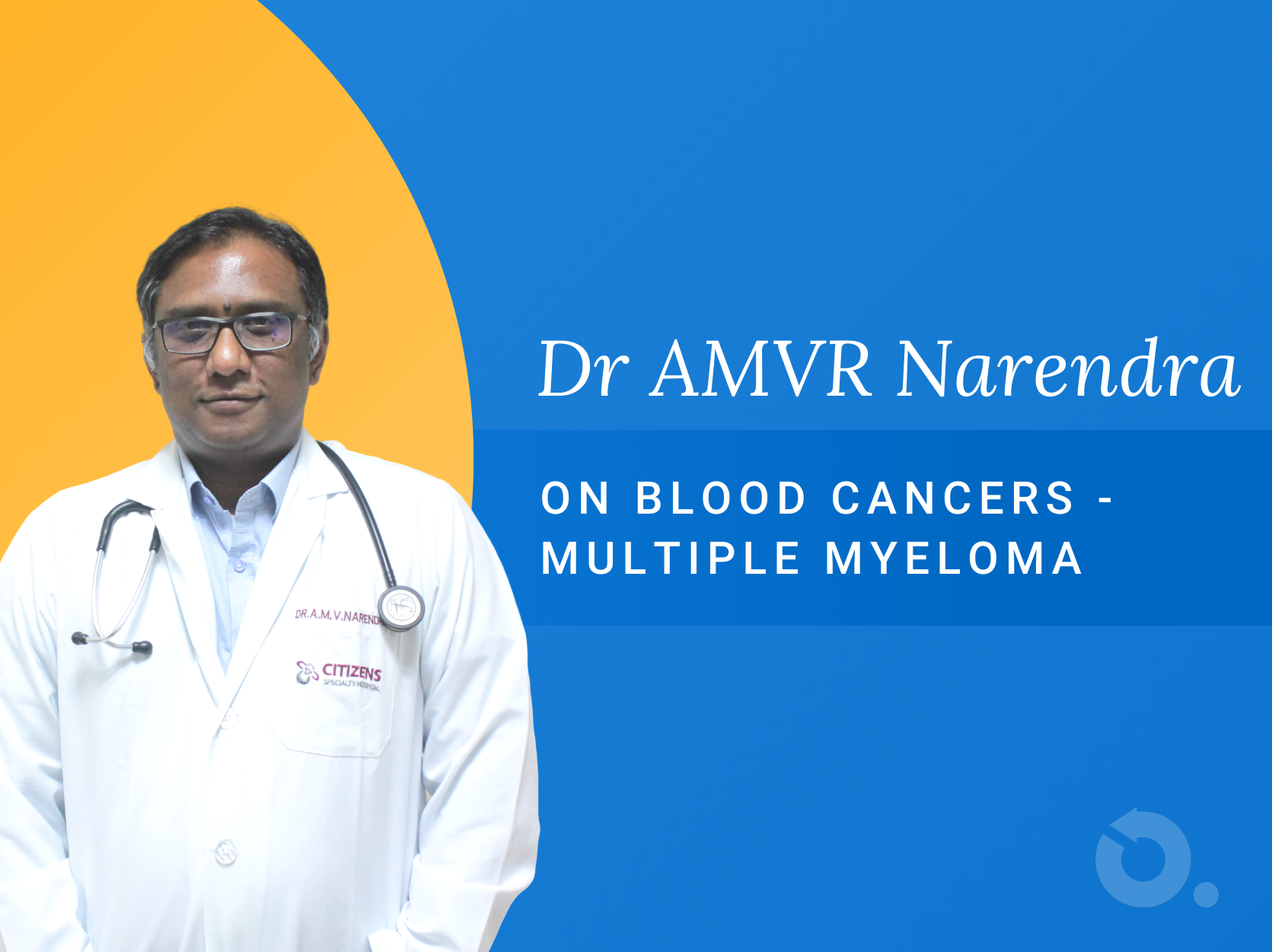 What are the Types of Blood Cancers?

There are three types of blood cancers – lymphomas, leukemias and myelomas. Leukemias are further classified into two types – acute and chronic leukemia. The difference between these three types is that leukemias start in the bone marrow and then go into the blood, whereas lymphomas start in the lymph nodes (causing lymph node enlargement) and rarely go into the blood. In myelomas, cancer cells involve the plasma cells, type of white blood cells which are low in number in the blood, which get accumulated in the bone marrow.

What are the Symptoms of Multiple Myeloma?

The most common symptom of myeloma is anaemia, which involves weakness, fatigue, and breathlessness. In myeloma, the normal bone marrow is replaced by the plasma cells, affecting the production of red blood cells. The plasma cells also affect the bones, which may lead to bone pain, hypercalcemia (higher levels of calcium – causing frequent thirstiness, fatigue, constipation, etc.,), bone brittleness, fractures in the spine or ribs.

What is Monoclonal Gammopathy of Undetermined Significance (MGUS)?

MGUS is an abnormal protein that gets accumulated in the blood. Among the general population, 3-4% of the people have MGUS, and usually are benign and show no symptoms. Problems arise only when these proteins get deposited on the kidneys or the bone marrow. The chance of MGUS turning into myeloma or other plasma cell malignancy is around 1%.

The incidence of myeloma is higher in men and 1.4 times more than women. Though women have lower incidence rates, they are more likely to have a higher risk, and a more aggressive form of the disease than men.

Multiple Myeloma and Anaemia – How are they connected?

As the plasma cells accumulate in the bone marrow and affect the production of red blood cells, which can lead to anaemia. Other reasons for anaemia are due to renal disfunction when the abnormal proteins from the cancer cells damage the kidneys, or when the production of erythropoietin (EPO) in the kidneys are affected.

What are the Treatment Options for Multiple Myeloma?

There are two types of bone marrow transplants – autologous (extracting the stem cells from a patient and giving back to them) and allogenic (the stem cells are taken from a donor who could be a blood relative). If a patient is eligible for autologous bone marrow transplant, it becomes the recommended course of treatment. The standard treatment includes few cycles of chemotherapy with a combination of drugs, followed by autologous transplantation, for those who are deemed fit.