My name is Sweta Saradava Patel, and I’m a 27-year-old mother. The little girl in the picture above is my daughter Pihu. And while my husband cannot stop marvelling at how she looks like a doll, I can say this with confidence today – She literally became the light of my life in my darkest hour. You see, I was diagnosed with one of the rarest forms of Cancer during the ninth month of my pregnancy. This is our story of fighting through. Spoiler alert: We made it. 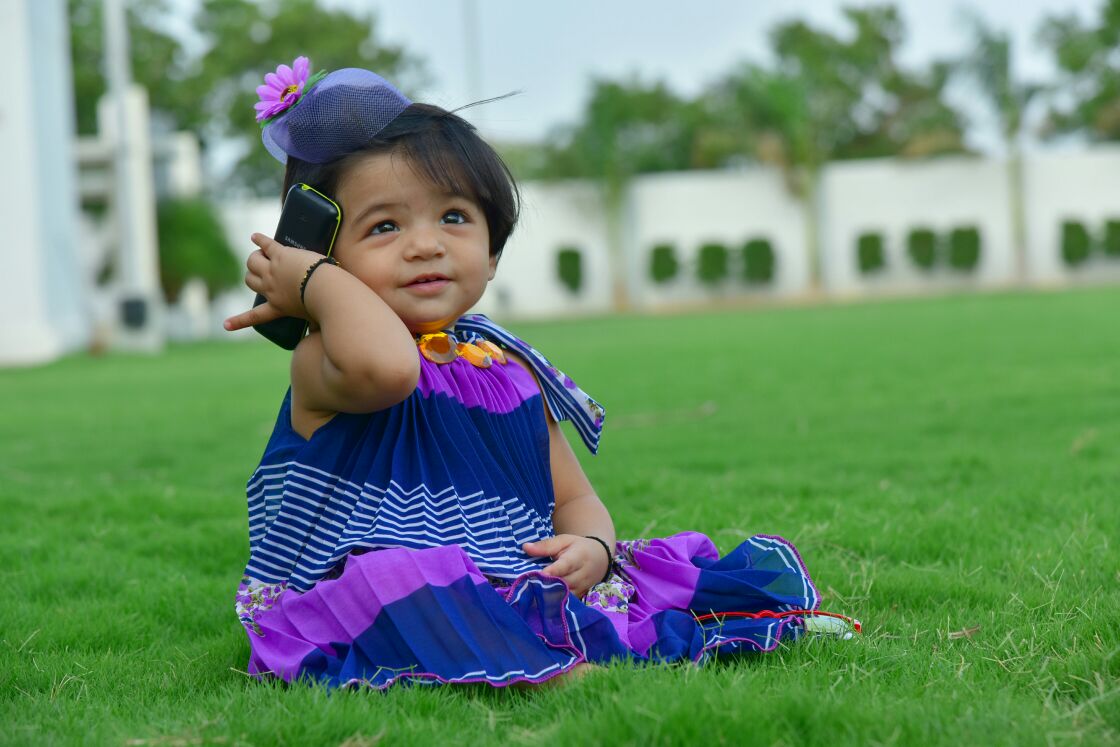 In the circles where I grew up, nothing beats the joy and excitement of expecting a child in the family. When I found out I was pregnant, I was overjoyed, to say the least. I became the centre of the universe and everything important, both for my husband and his family.

This was late 2015. My husband Bhavesh, who was working alongside a reputed doctor and a dentist at the time, took great pains to ensure that I received the best medical attention that we could afford. Everything was fine, until one of the doctors told us in the first trimester, that there was a slight abnormality in one of my routine Sonography reports. But the doctors insisted that it was probably nothing to worry about and that we should remain focused on a healthy delivery.

So we went back to dreaming and planning and singing songs and merrymaking with the family.

As is with any pregnancy, there are a million unusual symptoms that expecting mothers experience – frequent nausea, vomiting, cravings, stomach ache, and it was easy for me to attribute everything to the cause of bringing a new life into this world. So in a way, I was consciously suppressing my desire to look deeper into anything unusual.

Time flew by as it often does when we are happy, and soon I was in my last trimester. The ninth month, as they say. I was over the moon when they took me back to the hospital and gave me a tentative due date for the end of June 2016. One of the nurses said my baby’s birthday would most likely be 25 June. I could hardly contain my excitement. Or the pain I felt in my abdomen.

I remember the doctors and nurses really panicking for the first time when they saw me struggling to breathe, palpitating and crashing on the bed. It was not normal for pregnant mothers to exhibit such symptoms, and my basic medical scans had not revealed anything serious until then.

One night (and this is purely based on what the nurses told me later, I was unconscious for the most part of it) my blood pressure went through the roof, somewhere between 220 and 250. The next minute, I was at 60-70, barely alive by medical standards. I can only imagine what the family would have gone through at the time. Bhavesh was worried sick about me and the child, and when I was unconscious, they performed some additional tests, including an MRI and an Ultrasonography to check what was causing these issues, despite the fact that I was on the verge of delivering.

One of the doctors at the hospital told them, after an initial glance at the reports that there was some unusual mass in the Urinary Bladder region. They did suspect cancer at the time, but it was too risky to shift me to an oncological facility right at that point, as I was at a critical stage of my pregnancy.

There was darkness all around me. Bhavesh would later inform me that the doctors had taken a last minute call to put me on the table for an emergency caesarian procedure to save my child. Thanks to their timely intervention, Pihu came into this world on June 14th, 2016.

And I died. Well, medically. I had stopped breathing during the delivery, and had to be placed on life support. My family could not celebrate Pihu the way they had imagined so many times earlier, and were able to breathe free only when I regained consciousness later that night. And I saw my daughter, and I stopped listening to everything else that everybody was saying. The darkness was gone, and my light was right here.

One battle ends, another begins

My feel-good moment was shattered in an instant when the doctors decided that it was now safe to tell us that the suspected masses in my bladder were tumours. At the time they couldn’t tell us if they were cancerous. They asked us to go to a popular hospital in Ahmedabad, a few hours from Rajkot. Normally I would leap at the chance of travelling, and especially since the threat concerned my life and general well being, but right now I had a daughter to take care of.

Plus, I had already started considering the worst possibility – I had given birth when there was a chance that I had Cancer! What if I had unwittingly passed on the disease to this innocent child? I couldn’t think clearly, and as any mother can imagine, all my anxiety surrounded the newborn baby. Bhavesh was strong at the time and insisted that I receive the right treatment and that our daughter would need a mother not just now, but for the rest of her life. I had to be there to see her walk, to see her go to school, to tend to her wounds, listen to her problems, play with her. I needed to live. So after three months of back-and-forth between testing, tears, and trying times, I finally gave in to Bhavesh’s request of leaving Pihu with the family in Rajkot and travelling to Ahmedabad. Thus began my cancer journey.

To operate, or not?

I don’t think I’m the only Indian who is scared of surgery. It is a common dilemma, and usually, when a doctor tells you they won’t operate on you, you get happy. That did not happen in my case.

The doctors at Ahmedabad did a DOTA scan (a type of functional CT scan) to establish that I indeed had Cancerous tumors. And almost all tumours need to be removed surgically. Except in my case, they said they could not operate even if they wanted to. The tumours were in my bladder, and this was literally a one-in-a-million type of cancer. To effectively treat it, they would need to remove my bladder.

The hospital continued to provide tertiary care but advised us that we seek help elsewhere. All this while, my thoughts were centred on one thing – how my kid was doing back at home. It was hard living without my angel!

As we were in the process of trying to find a different hospital, my husband used his contacts within the medical industry to show my reports to a US doctor for a second opinion. They said the same thing – Surgery was risky in my case.

There is a hospital in Ahmedabad which is now linked to all my memories forever. They are a pretty well-known chain of Cancer hospitals in India, and one of the doctors told me that they could give it a shot. A practicing Urooncologist described a procedure in which they would remove my Bladder (and my Uterus, to reduce the risk of cancer metastasising or recurring) and although the Uterus could not be replaced, they could do something about my bladder.

They proposed that they would “reconstruct” an artificial bladder using my intestinal loops. Not a pretty sight to imagine! But it was the only shot I had at staying alive and being a mother. It also meant that I would never be a mother again, but these decisions become very easy when the stakes are as high as your life.

I said yes. Before long, everything was dark again. When they put me under general anesthesia, I just knew two things – This procedure was extremely risky, which meant I was their test case.

And second – I would either come out of it alive and well, to play with my daughter, or my daughter would grow up without a mother.

An old saying claims that delayed happiness grows exponentially. It took me about three to four more months to recover, and I was aching to see my daughter, who was growing up fast. My treatment had made me lose track of time, and I was dying (pun intended) to meet this kid who could probably talk and walk by now, and had my eyes!

Soon after we reached Rajkot, the family celebrated a much-awaited mother/daughter reunion. I remember how happy I was after I got my first family photograph clicked!

The unspoken elephant in the room though was the looming uncertainty over whether my daughter was likely to ‘inherit’ my cancer. I had my own share of anxiety to deal with. Fortunately, Bhavesh was able to get in touch with credible doctors – many of whom had the exact same thing to say: It was nothing short of a miracle that I had made it back alive, and that Pihu was not at risk for cancer.

Pihu was not at risk for cancer.

A number of tests recommended for Pihu: Zero.

Since the time of this discovery, I have studied many articles on the subject of Cancer Inheritance; but as the months passed by and I watched my daughter evolve like every other kid around her, my suspicions withered away.

A team of cancer consultants told me that today (15th Feb) is International Childhood Cancer Day. And even as I couldn’t dream of my child going through this disease, I express my solidarity and empathy for kids who do get affected by cancer.

Pihu turns a year and a half old soon. And she is cancer-free! I must express my gratitude to all the medical professionals, hospitals, and extraordinary people who imagined my survival on my behalf and made all of this happen.

This is a patient story, narrated in the first person to the Onco.com team over a telephonic interview. The views expressed in the article do not reflect or represent the opinions of Onco.com as an organisation. If you wish to contact the patient directly, you can write to us at community@onco.com.

Note: If you wish to consult our experts for their advice on your cancer diagnosis, or a second opinion on your current treatment, you can start your consultation today at Onco.com.