North-East India is now India’s ‘Cancer Capital’ – Here is everything you need to know!

With cancer incidence rates at double the national average, calling northeast India ‘the cancer capital’ is no longer an exaggeration. 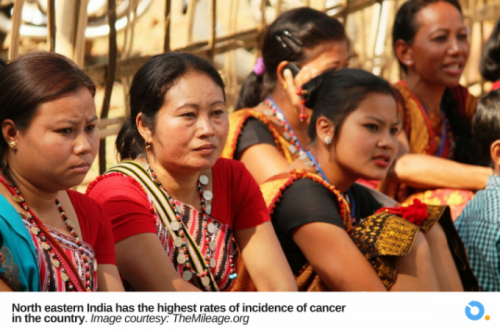 The reason for this is a combination of lifestyle choices, low awareness and late detection. Aside from this, there is an acute lack of expert oncologists and adequate treatment infrastructure – hospitals, diagnostic centers, etc for people affected by cancer.

While the national average of reported cancer incidences is 80-110 cases per lakh population, this number varies between 150-200 cases per lakh in the north east. Within the region, specific districts such as Aizawl (Mizoram) and Papumpare (Arunachal Pradesh) have reported the highest[1] age-adjusted cancer incidence rates within this regional belt. Aside from these regions, the state of Nagaland collectively hits a close second, with a population of just about 20 lakhs, and almost 1,300 reported cases of cancer every year. 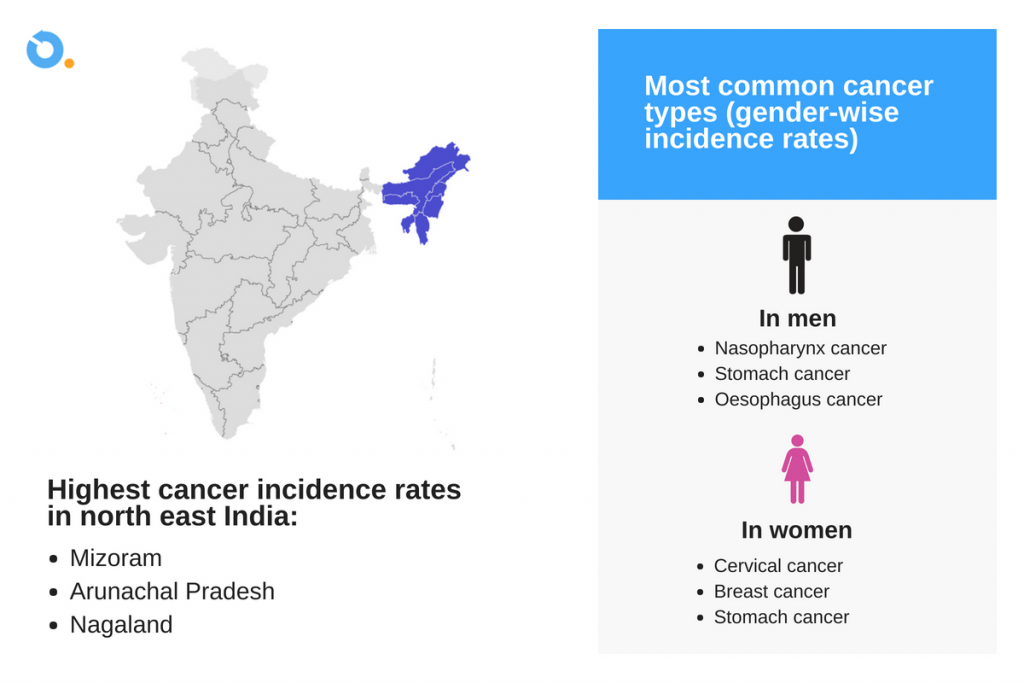 Excessive tobacco consumption (via cigarette smoke, chewable tobacco products, etc) stands out as a common lifestyle trait[2] in Arunachal Pradesh, Assam, Manipur, Meghalaya, Mizoram, Nagaland, Sikkim and Tripura. And as many as 57% of all cancers in north-eastern males and 28% of all cancers in north-eastern females are directly linked to tobacco consumption. According to reports, people in the region have also shown addictive behavior for raw betel nuts, and the fermented variety of betel nuts. These too contain confirmed carcinogenic substances, and contribute hugely towards the high cancer occurence.

Aside from this, a high incidence of oesophagus cancer is also linked to the region’s dietary habits[3]. The north-eastern palate comprises foods high on spices and chillies (the region is famous for being a spot of origin for homegrown varieties of chillies, such as bhut jolokia). People are also prone to consuming large quantities of hot beverages such as tea and coffee. These habits have been linked[4] to high incidence rates of oesophagus cancer. A 2009 study in particular showed[2:1] that people who consumed very hot tea were four times more susceptible to oesophageal cancer.

Aside from dietary habits, high-incidences of sexually transmitted cancer types in the north-eastern region have also been linked to general lifestyle practices within the native populations[5].

Sadly, even though the north eastern region has the highest cancer incidence rates in the country, the number of adequately equipped treatment centres is abysmally low.

Comprising the entire north eastern belt, there are just about 8 centres that offer functional help for cancer patients, including essential treatments such as surgery, chemotherapy and radiation. These centres are present in Guwahati (Assam), Dibrugarh (Assam), Silchar (Assam), Imphal (Manipur), Agartala (Tripura) and Shillong (Meghalaya). There is also an acute lack of expert oncologists in the region, making most patients reliant on local physicians, GPs and referral hospitals, who seldom do more than merely referring a patient to Kolkata, Patna or other cities in neihboring states for treatment.

This prompts most patients to travel outside their districts and states to seek treatment. It also leads to low compliance, because in cancer treatment, patients often need to visit a hospital quite frequently. By relying on outstation treatment destinations, patients often become prone to skipping critical scans, follow-up procedures, etc.

In regions such as north eastern India, where people are faced with high incidence rates and inadequate treatment options, it is essential to facilitate remote consultations that can be delivered via the phone or over the internet. This will allow patients and their families to consult expert oncologists from the convenience of their own homes – even before they start planning for travel. They need to be sure about the line of treatment and the exact impact it will have on their cancer, before they commit to a particular treatment routine.

What can you do to solve this crisis?

Fixing the north-eastern cancer crisis is not a one-man job. It requires the cumulative efforts of hospitals, administrative bodies, medical organizations, NGOs and more – to impart the right awareness and lifestyle guidance necessary.

The onus on treating cancer more effectively, also lies with the native population. People in the north east need to adopt healthier lifestyle habits. Specifically, tobacco consumption needs to be controlled. At an individual level, people need to quit habits such as smoking, chewing tobacco, and reduce the consumption of extremely spicy foods and piping hot beverages.

People affected by cancer should also explore the right treatment options, backed by a thorough clinical evaluation of each patient’s individual medical history, and treatment recommendations from a team of expert oncologists – even before they decide to travel for their treatment.