At the age of 15, this boy invented a highly-effective diagnostic technique to identify pancreatic cancer. 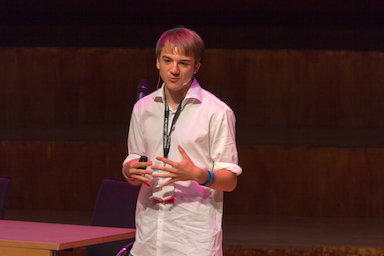 Meet Jack Andraka, Born in 1997.
Today, the internet describes him as a scientist, a cancer researcher, and an American Inventor. Using paper sensors that can detect mesothelin (a biomarker for cancer), Jack developed a special variety of diagnostic strips with the same look and feel as diabetic testing strips, to detect the presence of pancreatic cancer at an early stage.

Andraka coated strips of filter paper with a mixture of single-walled carbon nanotubes, which made the paper conductive, and antibodies against human mesothelin. Samples containing mesothelin were applied to these paper test strips, and the binding of mesothelin to the antibody was quantified by measuring changes in the electrical properties of the strip.

As publicly revealed by Jack in multiple interviews, he was encouraged towards research in the field of early cancer diagnosis by the death of a close family friend, afflicted by pancreatic cancer.

So I was wondering, why we are so bad at detecting pancreatic cancer. What I found was eye-opening and shocking to me. Our “modern medicine” is a 60 year old technique. It’s highly outdated and grossly inaccurate. It misses over 30% of all pancreatic cancers. In addition, it’s pricey. It costs $800 per test and it’s not covered by insurance. So, it’s not an option for low income patients.
—Jack Andraka

Among the various types and subtypes of cancer, pancreatic cancer has a relatively low early-detection rate, making treatment all the more challenging. Jack discovered that a lack of effective screening methods was responsible for this predicament. He also attributes a strong sense of young-adult courage and the presence of an online environent as top driving factors behind his contributions.

He kept writing to professors, but Andraka’s proposal to build and test the pancreatic cancer detector was rejected 199 times before he landed at Johns Hopkins. He used strips of filter paper, carbon nanotubes and antibodies sensitive to mesothelin to build his device. The strips have demonstrated 100% accuracy in preliminary tests. It’s faster in terms of identifying cancer, costs about 3 cents, and is attracting admiration from some of the world’s best scientific minds.

This kid is the Edison of our times. There are going to be a lot of light bulbs coming from him.

In 2012, Jack was conferred the Gorden E Moore Award. Reportedly, his pancreatic cancer detection strips are 168x faster and 1⁄26667 times less expensive, 400 times more sensitive than ELISA (An existing screening method), up to 50% more accurate than CA19-9 testing, and over 90 percent accurate in detecting the presence of mesothelin.

We at Onco.com celebrate Jack’s commitment to the cause of early detection of Pancreatic Cancer, on #WorldPancreaticCancerDay.