This Clinical Trial Saved A 2-Year Old From Stage 4 Cancer!

When he was just 6 months old, Gideon Purchase was diagnosed with Stage-IV High-Risk Neuroblastoma. Following a 15-month Cancer battle and the nearly miraculous availability of a Clinical Trial (combining Chemotherapy and Immunothrapy), he is now in remission. 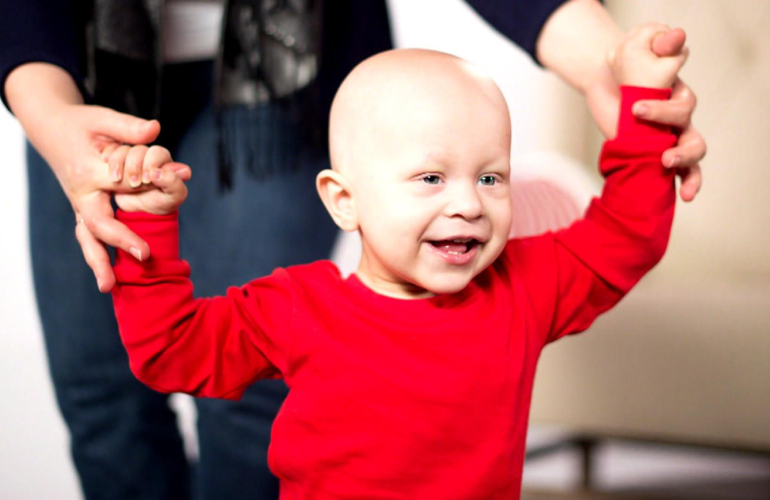 At a time when most people are busy admiring the cute antics of their children, Katie and Gary Purchase were faced with a truly devastating dilemma. Their 6 month-old child Gideon started losing his appetite and couldn’t sleep well. He became fussy, and most of these symptoms were attributed by his parents as side effects of teething. After the appearance of a yellowish bruise over one of his eyes, they became more concerned.

When the bruise extended to both eyes and a lump appeared on his head, they took an emergency trip to their doctor. The hospital revealed a critical diagnosis – Stage 4 High-Risk Neuroblastoma.

Katie (Gideon’s mother) recalls that the scans revealed a large tumor present in the middle of Gideon’s body, and that the Cancer had spread into his bones, face and skull.

Standard treatment outcomes are not very promising in such cases, and Gary and Katie felt confused and helpless about the situation until one of the practicing oncologists on Gideon’s case suggested a new form of therapy, as a specialized clinical trial.

The trial used a unique approach to immunotherapy, combining an antibody with chemotherapy at the beginning, middle and end of Gideon’s treatment. Gideon started responding well to the treatment – At the end of six weeks, many of his tumors had shrunk significantly, and the ones in his face, arms and legs had disappeared completely.

“Given its inherent property to utilise the body’s own defence mechanisms against cancer cells, Immunotherapy can be a game changer in cancer treatment outcomes.”
-Dr Amit Jotwani (Sr Oncologist, MD)

“The early results are surpassing all of our wildest expectations.He went from 84 percent of his marrow having tumor, to zero percent!”
-Dr Sara Federico, Gideon’s attending doctor (At the time of treatment)

At the end of this treatment, Gideon still had to undergo a bone marrow transplant, followed by radiation. Gideon had to endure 15 months of treatment in total before the doctors declared him “healthy”.

Today, Gideon is an energetic 2-year-old kid, conclusively in remission. His parents savor every moment that they spend with him.

This is the story of a Cancer survivor, presented as per facts that were originally published on Today.com.

Onco.com Salutes The Spirit Of Women Fighting Cancer – 50% Off For All Female Cancer Patients!

Sonam Jain: A Story of Struggle, Strength, and...