“It was 2013, I was in the last semester of BA.LLB when I found out that I had stage III cancer.”

I did not know anything about cancer. No one in my family ever had it. So the diagnosis was very confusing.

We had heard only negative things about cancer. It was scary to imagine what lay ahead. There was really no one to guide me at this point, because no one who was close to me had any clue how to deal with this diagnosis.

So I’m writing out my experience, and what I learnt from it, so that you can benefit.

No one deserves to be alone at such a time. 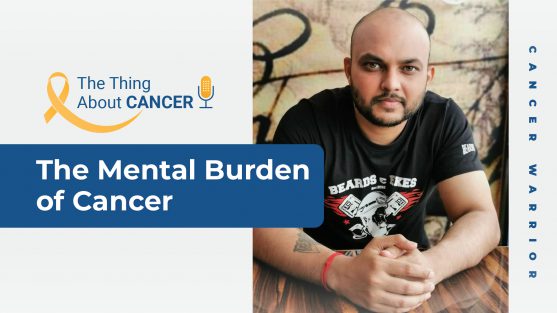 Cancer doesn’t wait for anyone

It was a lump on the right side of my neck that led to the detection of my cancer. I had Hodgkin’s lymphoma HL.

The doctor told us that I would need to start on chemotherapy immediately . But we said no. I wanted to complete my studies first and I had heard about the terrible side-effects of chemotherapy. I did not want to undergo chemotherapy.

So I went on to complete my graduation while trying out some less intense, alternative therapies.

I was constantly sick, and became very weak. I could barely walk. But I managed to complete my studies and became a Law graduate.

After I completed my graduation, I went back to run some tests. It was the summer of 2014. The tests showed that my cancer had progressed to the last stage; stage IV.

At this time, I had enrolled for an MBA and had moved to Bangalore. But I was not going to repeat the mistake of waiting any longer. I gave up my MBA. I moved to Hyderabad where my brother lived. I started on my treatment.

Cancer is not unbeatable

I started my cancer treatment with 12 ABVD chemotherapy sessions, under the guidance of a well-known oncologist in Hyderabad.

The treatment was not easy, but I can honestly say that it was not tough either.

There were two factors that made it possible for me to complete my treatment well. The first was the support of my family.

My family took care of all my needs; be it providing the right kind of food, or the money for the treatment. They also managed me when my emotions got out of control.

There were many times during the treatment when I felt extremely low. I was in my 20s and I was losing my hair and my looks. I was also losing the time that I should have had to build my career. These things impact one a lot at that age.

My parents and siblings stood by me, even if there were time when they didn’t fully understand what I was going through. I knew they had my back and that was a big source of strength for me.

Contrary to what many people think about cancer, it is actually something that can be survived. I am living proof of this, and I am not the only one. There are millions of cancer survivors around the world today.

The cancer of ignorance

During my cancer journey, I came across many people who had no understanding of cancer. They assumed that cancer ends only in death. I found it more difficult to deal with these mindsets than with cancer itself.

In 2016, I started looking for a job. I had been practising yoga for the last one year and was in a good place physically and mentally.

Since there was a gap in my resume, I felt the need to explain to the recruiters that I was undergoing cancer treatment during that time.

Many employers reacted negatively to this. One employer even said that I cannot handle the work pressure at that company as I am a cancer survivor. Another said that I would not be able to sit continuously for many hours and work, due to my medical history.

I was very surprised to hear such comments. There are so many misconceptions about cancer in our society. Many people just cannot accept that a cancer survivor can fit back into normal life without much problem.

Finally, I got a job at a well-known multinational corporation and successfully worked there for several years. Sometimes, all we need is a chance to prove ourselves. It can be very frustrating if no one is willing to give us that one chance.

My campaign for cancer awareness

In March 2016, I decided to do something for cancer awareness. I planned a solo bike ride across India, with stops at different cities to talk to people about cancer.

I arranged my finances for this with the help of my family and five of my friends.

My family had already spent a lot on my treatment, but they saw how enthusiastic I was about this and they chose to help me.

On the 1st of May that same year, I started my ‘Ride of Hope’ from Raipur, Chhattisgarh. I covered all the four corners of the country, travelling 20,000 kms, across 15 states. I visited cancer institutes, schools and offices en route. Everywhere I went, I spoke about my own cancer experience and helped dispel some myths about cancer and cancer survivors.

I regularly run marathons for cancer awareness, and volunteer at social events.

My life after cancer

Life after cancer has given me a lot of wisdom. I know who my true family and friends are, and who were only there for the good times.

I know I can work in corporate settings like I always wanted to.

I have learnt to manage my health through a healthy and active lifestyle.

I have more friends now than I ever had in my life.

The future is full of hope. I want to complete my biking journey through the remaining 14 states of India. I want to speak to as many people as possible about cancer so that there is less taboo and more respect for survivors/.

I cannot eradicate cancer from this world, but I can definitely do my bit to spread awareness and hope wherever I go.

If you want to support my cancer awareness campaign, you can donate through the link below. No amount is too small for this cause:

What Does ‘Quality Of Life’ Mean For Cancer Patients?