Lungs are a vital part of the respiratory system and are located above the diaphragm and behind  the rib cage. These two spongy organs are not of the same size; while the right lung is divided into three sections that are called ‘lobes’, the left lung has two sections or lobes. As the heart takes up the space in the left side of the chest, the left lung is smaller in size. 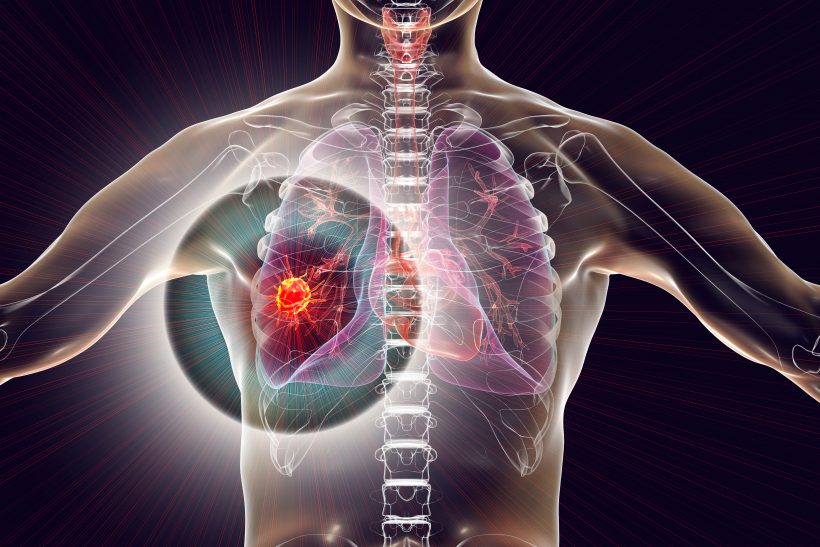 When you breathe in through your mouth or nose, air enters your lungs through the trachea (windpipe). The trachea branches out into smaller tubes called bronchi that further divide into smaller tubes called bronchioles when they enter the lungs. The bronchioles have tiny air sacs at their end, known as alveoli. These air sacs absorb oxygen from the air you breathe, into your blood, and expel carbon dioxide as you breathe out. The main function of the lungs is to take in oxygen and expel carbon dioxide.

The lungs are surrounded by a thin lining called the pleura that cushions and helps the lungs move forward and backward during breathing.

The diaphragm is a dome-shaped muscle that separates the abdomen and chest. As you breathe, the diaphragm moves to force air into and out of your lungs.

Lung cancers typically start in the cells that line the bronchi, bronchioles or alveoli. It is broadly categorized into two types — non-small cell and small cell lung cancer, based on their microscopic appearance.

The most common lung cancer type is Non Small Cell Lung Cancer (NSCLC). In the western world, NSCLC accounts for close to 85 percent of lung cancers.

NSCLC has three main subtypes which include

Adenocarcinoma: Adenocarcinoma has emerged as the most common type of lung cancer in most of Asia and in the Western world. While there have been no large scale epidemiological studies in India with respect to incidence of different types of lung cancer, single-centre reports from tertiary cancer centers indicate adenocarcinoma as the subtype that is most prevalent in India, followed by squamous cell carcinoma.

Although this form of lung cancer is seen in former and current smokers, with rising incidence seen recently, it is also commonly seen in non-smokers and women.

Other subtypes: Some other, less common types of NSCLC include sarcomatoid carcinoma and adenosquamous carcinoma.

Although less common when compared to NSCLC, small cell lung cancers account for about 10% to 15% of all lung cancer cases.

There are three subtypes of SCLC and these subtypes are named based on the kinds of cells present in cancer and the way the cancer cells look under a microscope:

If untreated, small cell lung cancers can turn fatal in a matter of a few weeks, when compared to slower growing NSCLC with metastases.

Stages:  Using the TNM staging, the growth of NSCLC is divided into four stages.

Limited stage: In this stage, the cancer generally is found in one lung with or without the involvement of nearby lymph nodes on the same side of the chest. Doctors use aggressive treatments including radiation combined with chemotherapy to treat cancer in the limited stage.

Extensive stage: Cancers which have spread from the lung to distant lymph nodes, the other lung or other body parts including the bone marrow, are classified as extensive-stage SCLC. Chemotherapy is the preferred treatment option at this stage of SCLC.

Irrespective of the stage of small cell lung cancer, an essential treatment option is chemotherapy. Radiation therapy may be used in addition to chemotherapy, depending on the stage of cancer.

Know more on the treatment options for limited stage SCLC

In cases of extensive stage SCLC, the cancer would have spread too far for surgery or radiation therapy to be used as initial treatments. Chemotherapy, possibly with a combination of an immunotherapy drug is usually followed as the initial treatment procedure among people with fairly good health. Etoposide and cisplatin/carboplatin are a common combination of chemo drugs used. Immunotherapy drugs like atezolizumab may also be used along with the chemotherapy drugs for initial treatment. While this can help to shrink the cancer significantly in most patients, unfortunately, the cancer will recur at some point in cases of extensive stage SCLC.

Know more on the treatment options for extensive stage SCLC

Surgery is more likely the treatment option for stage I and II NSCLC, and may be followed by chemotherapy and/or radiation therapy depending on post-operative biopsy report. For patients who are medically inoperable or refuse surgery, SBRT (Stereotactic body radiotherapy) may be an option.

Know more on the treatment options for early-stage NSCLC

In stage 3 NSCLC, the cancer would have spread to lymph nodes that are near the other lung or in the neck. Hence, surgery won’t be a viable option as the cancer would have grown to other important parts of the chest. For those in fairly good health, chemoradiation may be the initial treatment. If the cancer is under control after chemoradiation, immunotherapy drug durvalumab may be recommended for a year to further stabilize the condition. For those who won’t be able to tolerate chemotherapy or radiation therapy, targeted therapy or immunotherapy may be used as the initial treatment.

Know more on the treatment options for locally advanced NSCLC

Precisely understanding the goals of the treatment is very important when it comes to Stage 4 NSCLC as it is widespread to different parts of the body and very difficult to cure. Chemotherapy, radiation therapy, immunotherapy, targeted therapy or surgery may be used to overcome the symptoms even though the cure is less likely.

Considering the complexity of SCLC and NSCLC lung cancer treatment in later stages, it is quintessential for patients and caregivers to know

– the complexity of the tumour

– the locations to which they have spread

– side-effects to expect from the recommended treatments

– how to cope up with post treatment conditions, requirement of additional care like palliative or supportive care

Discussing these with your doctors and understanding everything underlying the treatment options can increase your confidence before, during or after the treatment and help you stay strong in your journey on managing cancer.

Lung cancer, as with other cancers, is highly treatable when detected early. Contact a lung cancer specialist in your area to know more about screening, treatment options and the risk factors of lung cancer.