(Paul Finch with Dr Shahnawaz Rasheed in 2017. Image Courtesy: Express UK)
Paul Finch was first diagnosed with Advanced Bowel Cancer in 2014, and his doctors told him that he had a 10% chance of survival. His initial diagnosis led his doctors to conclude that he needed aggressive chemotherapy followed by the surgical removal of his bowel, bladder and prostate. 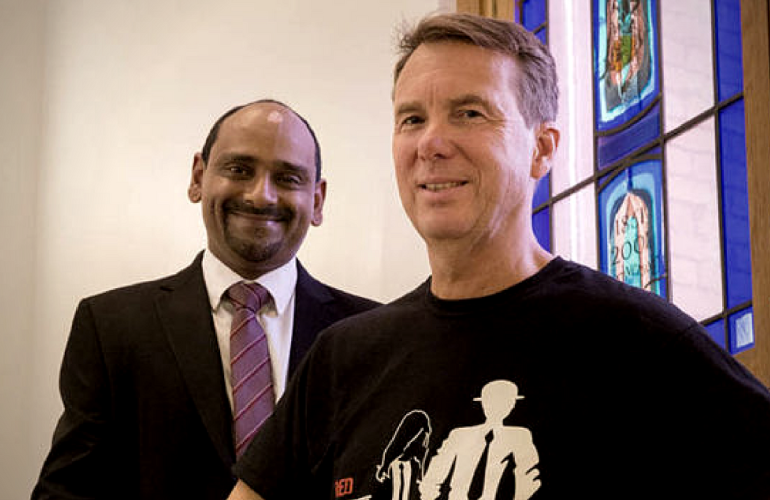 In addition to the possibility that he might not live long, he faced the prospect of being dependent on a colostomy bag for the rest of his life. This is the story of how his life turned around with an accurate Second Opinion.

Spoiler Alert: Paul Finch leads an amazing and healthy life today. Only a few scars remain – no tumors whatsoever. This is the story of a near miracle that saved Paul’s life.

Paul Finch explains that he had experienced persistent gastrointestinal problems before deciding to pay his doctor a visit. Initially, he kept dismissing most of his symptoms, attributing them to acidity-caused flatulence.

“I was going through a divorce, and my business was struggling”, says Paul. He was under a lot of pressure, and naturally assumed that his flatulence problems were a direct result of stress. In December 2013, his problems had settled down a little, but the symptoms continued. It was then that he went to a General Physician, and after a few routine scans, the doctors had investigated and confirmed that Paul was suffering from Stage-III Bowel Cancer.

The doctors informed Paul that he had an 8 cm-long tumor in his rectum. The tumor had grown slowly, and at the time of diagnosis it had grown so much that there was a danger of the tumor could break through the wall of his bowel, and at that stage the Cancer was likely to metastasise.

Paul’s attending doctor did an initial assessment of how bad the prognosis was, and advised aggressive cycles of Chemotherapy, followed by surgical procedures that would remove not just his bowels, but also his bladder and prostate.

Somthing like this was likely to cripple Paul (unless it killed him first).

But fate had something else in store for Paul. His partner Julia (A Managemnt Consultant), insisted that they seek a qualified Second Opinion for Paul’s Cancer.

“If I had accepted the first opinion from the doctor, then my life would be very different. But Julia stood her ground, and did some research and the journey changed very much. I’m very grateful that I didn’t have any surgery.”
-Paul Finch (Cancer Survivor)

Paul confirms that as a patient, it never occured to him that he could question what the doctor had said. Paul trusted his doctor completely, and confesses that he was “worried about offending him” at the time, by asking someone else to look at the medical facts. Julia was persistent, though – and they did end up seeking a second opinion.

The Second Opinion: A new hope

Paul and Julia consulted a Chelsea-based hospital for their second opinion. After a panel of oncologists had reviewed Paul’s medical history, a new outlook was applied to his treatment. Instead of the scary surgical treatment advised earlier, Paul was introduced to a clinical trial that involved shrinking the tumor over six months of Chemotherapy, followed by six weeks of Radiotherapy to eliminate any Cancerous cells that remained.

“We gave Paul Chemotherapy and Radiotherapy, and in a small proportion of patients, this shrinks the cancer completely. Paul was one of the lucky people for whom the Cancer regressed. Because the treatment is still in a trial stage, we don’t know (yet) what percentage of patients it works for, but it is less than 50 per cent.

On the subject of second opinions, Dr Rasheed continued to explain that people are generally hesitant to seek Second Opinions for such complex Cancers, because their symptoms can be uncomfortable to discuss. But he confirms that earlier the patient gets an accurate diagnosis, the better the outcome.
Dr Chris Fraser (a specialist in the care of patients affected with diseases of the bowel, colon and stomach) restricted his comments on this case, to the domain of Second Opinions for diseases as complex as Cancer. He says,

“Doctors are professionals and understand patients’ concerns, especially when there is continued uncertainty about a diagnosis or failure to improve after treatment. In seeking a Second Opinion, a patient is not challenging the ability of the original doctor, but ensuring that every option has been considered and explored.”

Paul Finch’s treatment was not just tiresome, but also resulted in a weakened immune system. This paved the way for an initial bacterial infection in one of his lungs. Paul underwent minimally invasive surgery to treat this infection, but his Cancer treatment was successful, as revealed by his post-op scans.

Today, he runs a charity called Red Trouser Day to support the plight of those affected by Bowel Cancer. Paul and his sons have raised over £80,000 to support Cancer patients so far.

“You get these wake-up calls and it affects everybody. I certainly appreciate life a bit more now. I know that I’m lucky to be alive.”
-Paul Finch (Cancer Survivor)

Note: This is a patient-story, based on facts that were originally published by The Sunday Express (UK).