Cancer warrior speaks: When Grit is Thicker than Blood

Meet Jason D’Souza, an ambitious, well-read 27-year-old, working as a research analyst at a multinational corporation in Bangalore. He enjoys number crunching all week and unwinds by watching movies based on Marvel heroes and comedy shows during the weekend. He loves to have a good laugh. 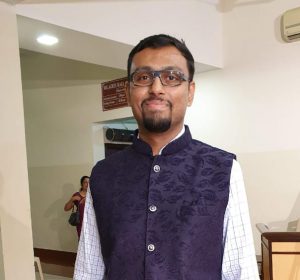 That is what Jason is like on the surface, but if you look deeper, there is a culmination of certain life experiences that he prefers not to talk about. It started when he was 22 years old. He was a fresh graduate, living in Qatar at the time, he was preparing for his higher studies.

It was just another afternoon at the pool when he felt quite sick and unable to continue. His family took him to the local hospital for a check-up. They expected it to be the flu. It turned out to be something more serious. He was required to undergo certain blood tests. During the course of these tests, he was diagnosed with acute myeloid leukemia (AML).

What is acute myeloid leukemia (AML)?

The symptoms of leukemia are easily mistaken for other ailments. These include anemia (low count of red blood cells), persistent fever, unexplained weight loss, and pain in bones. When these symptoms are persistent, it is essential to consult a doctor who may suggest further tests to find the cause of your discomfort. You can read more about it here.

In short, AML is a type of cancer that affects the bone marrow. The bone marrow is made up of blood-forming cells, some of which are blood stems cells. Blood stem cells develop into different types of blood cells, including myeloid cells.

In AML, an abnormality develops in these myeloid cells. With acute types of leukemia, the blood cells do not mature as they should. The immature cells keep building up, leading to cancer. This type of cancer can spread quickly if not treated immediately. 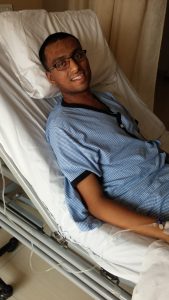 The diagnosis was something that shook his world. He did not want to believe those reports. But he was required to undergo immediate treatment. During the course of the treatment, Jason did not want to read up about his illness or even dwell too much upon it. It was as if he wished he could turn a blind eye to it, and it would just go away. He was a young man with definite plans for his future. The leukemia was getting in the way of everything. But cancer is not something you can wish away.

Fortunately for him, he is blessed with a supportive family who immediately took charge of matters. His father did a good amount of research on his medical condition. He enquired what the best hospitals for the treatment of leukemia were, and zeroed in on Lilavati Hospital in Mumbai. Chemotherapy was recommended and Jason went through four sessions before Jason was in remission.

Having recovered, Jason decided to move forward with his life and went to the US for further studies. In December 2015, during a routine blood test in the US, it was discovered that the cancer had relapsed. Following this diagnosis, Jason returned home to his family in India. More tests followed and it was found that in addition to the leukemia, he had developed Hodgkin’s lymphoma.

What is Hodgkin’s Lymphoma?

Lymphoma is a type of cancer that affects the white blood cells (also called lymphocytes). The lymph system helps to control the flow of fluids in the body and is a part of the immune system. Therefore it helps to protect the body from infections.

The lymph system is made up of two types of white blood cells: B cells and T cells. Of these, B cells produce a type of protein called antibodies which help fight bacteria and viruses. Hodgkin’s lymphoma starts in the B cells.

Studies have shown that the treatment for Hodgkin’s lymphoma increases the risk of developing acute myeloid leukemia. But in Jason’s case, He was diagnosed with leukemia first and developed the lymphoma later, suffering from both conditions simultaneously. Jason went through radiation and bone marrow transplants.

The treatment came with its own set of side-effects. There was hair loss, ulcers in his food pipe and increased susceptibility to infections. However, Jason made it through the treatment and has been in remission for the last three years.

Now that you know what Jason has faced, you would expect him to have grown bitter. It would be natural to look upon the unfairness of illnesses and develop a sense of anger. But if you have the grit to survive cancer physically twice, you can also find the grit to overcome it mentally. 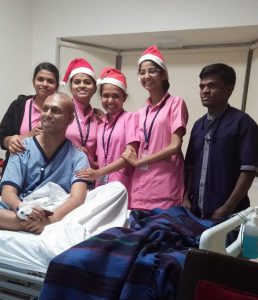 When you speak with Jason, what strikes you is the politeness with which he conducts himself. When he talks about his cancer journey, what he also recalls is the kindness of his family and even the strangers around him. He recalls how the nurses in the hospital dressed up in Santa outfits around Christmas. Maybe it is this ability to look upon the darkness without losing view of the fireflies in the distance that helps us survive.

Why is Jason sharing his story?

Speaking about cancer is not something that Jason enjoyed initially. It seems more pertinent to move past it, put it behind. His friend had attended the Talk Your Heart Out event organised by Onco.com. He spoke with Jason about it and he decided to attend the next event. Now, he is willing to speak to anyone who will benefit from listening to him.

There is a stigma associated with cancer that prevents us from openly talking about it. This stigma prevents the sharing of valuable information, leading to misconceptions, and consequently, to delayed diagnosis, delayed treatment and therefore to lower success rates. The more we talk about cancer, the more we learn and the better we will be at fighting cancer.

Jason believes that when he was sick, it was the prayers of his family that gave him the strength to recover. He knows that others need that support too, to complete their own cancer journey. It could be a word of advice, a patient ear, or even a silent acknowledgment of what another person is facing.

No gesture is too small and might be just what was needed to encourage another to keep fighting. For, cancer is not unique to you. You are one among millions who continue to fight cancer in its many forms, and together we can keep the fight going.

*If you would like to attend a Talk Your Heart Out event, you can write to us at community@onco.com.

When to Get Palliative Care for Cancer