Brachytherapy is an integral part of the management of cervical cancer for cases where radiation therapy is the primary treatment.

Cervical cancer is one of the most preventable and treatable types of gynaecological cancers across the world. According to the current data, cervical cancer is the 4th most common cancer among women globally.

The cervix is the lower part of the uterus that connects the vagina (birth canal) and the uterus. Cervical cancer occurs when the normal cells of the cervix undergo mutation (changes) in their DNA and begin to grow out of control.

Like most cancer, cervical cancers can be managed effectively when diagnosed early.

Brachytherapy is often used to treat cancers of the head and neck, breast, cervix, prostate, eye and and soft tissue sarcomas of extremities.

The type of brachytherapy that is often used to treat cervical cancer is known as intracavitary brachytherapy. Here the radiation source is placed inside the vagina or cervix near the tumor, to deliver a high total dose of radiation in less time.

Why is brachytherapy done?

According to the International Federation of Gynaecology and Obstetrics (FIGO), all women with locally advanced cervical cancer stage IB2-IVA should be considered for brachytherapy as part of their main treatment and management.

For advanced stage cancers, it is performed right after other radiation methods like external radiation therapy, to improve the outcome of the treatment.

Compared to other radiation methods, brachytherapy delivers a curative dose of radiation precisely on the target cells.  Therefore, the damage to the surrounding organs such as the rectum, bowel, and bladder is reduced.

What are the different types of brachytherapy?

Depending on the type of cancer and its stage, brachytherapy may be temporary or permanent.

Temporary brachytherapy is given either at a low-dose rate (LDR) or high-dose rate (HDR).

Once the device is in place and the radiation material is inserted, the patient is moved to a shielded hospital room to prevent radiation harm to others.

The patient has to be isolated for a few days to deliver appropriate radiation. After the required time period, the radioactive material is removed from the body.

This type of brachytherapy is now obsolete and not practised.

HDR treatment is usually an outpatient procedure. However, some patients are admitted to the hospital for one to two days depending on the stage of cancer and overall health of the patient.

The radiation source is inserted inside the body under general anaesthesia or moderate sedation. The patient may have to undergo one or two sessions a day over a number of days or weeks.

Once the radiation source is removed, the patient can go home. The whole process typically takes two to three hours.

It involves the implantation of seeds made of radioactive substance next to the tumor and is left there for several months. This implant remains in the patient’s body for the rest of the life, but the amount of radiation diminishes overtime.

What are the risks?

In brachytherapy, the radiations travel for a short distance, and thus the main effects of the radiation is on the cervix and the walls of the vagina.

As the treatment progresses, patients may experience some short-term side effects that begin to appear after initiating the treatment. These include:

However, there are some long-term side effects that may or may not resolve. These effects appear months to years after the treatment.

How to prepare for the procedure?

A pre-surgical testing before the brachytherapy is needed, where the healthcare team would review your medical and surgical history. Certain blood tests and imaging tests would also be performed to help evaluate and finalize the type of anesthesia for the procedure.

What to expect during the procedure?

The radioactive material is placed inside the body depending on certain criteria:

These applicators are held in place by cotton gauze packed around these applicators placed in the vagina. This gauze packing helps lower the amount of radiation to surrounding organs like rectum and urinary bladder during the treatments & thus decrease the incidence of side effects. Imaging tests are done after the applicator is placed to ensure applicator is in position and also for treatment planning. 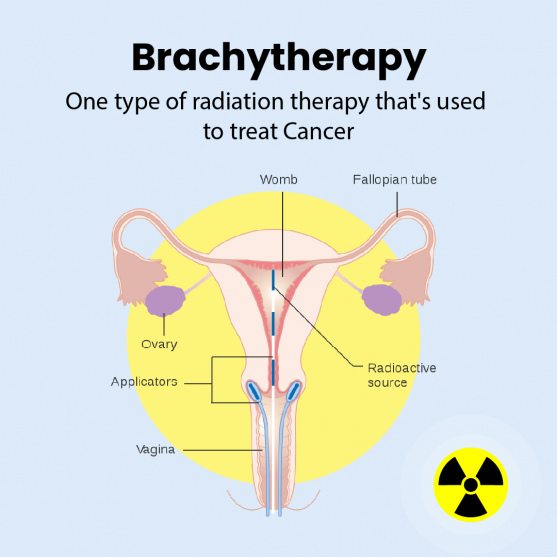 Usually, a magnetic resonance imaging (MRI) scan is the preferred imaging test for brachytherapy treatment planning. However in some centres, X ray or CT scan based imaging is also used.

The applicator is then connected to a machine that holds the radiation source, and the planned dose of radiation is delivered.

Once the course of brachytherapy is completed, the healthcare team may recommend scanning tests after 6-8 weeks to determine whether the treatment was successful.

Brachytherapy is one of the most effective cancer treatments as it targets the specific/limited area of interest and has a high success rate. In most cases, the patients who are diagnosed with cancer in the early stage get easily cured with brachytherapy.

For the later stages of cervical cancer, the brachytherapy is combined with the other types of treatments to manage the condition effectively. However, the treatment is more effective when it is completed within a specific period of time and the radiations are delivered in appropriate amounts.