According to GLOBOCAN database, the second most common cancer among Indian women is cervical cancer. Cervix is the lower portion or mouth of the uterus facing in the vagina. 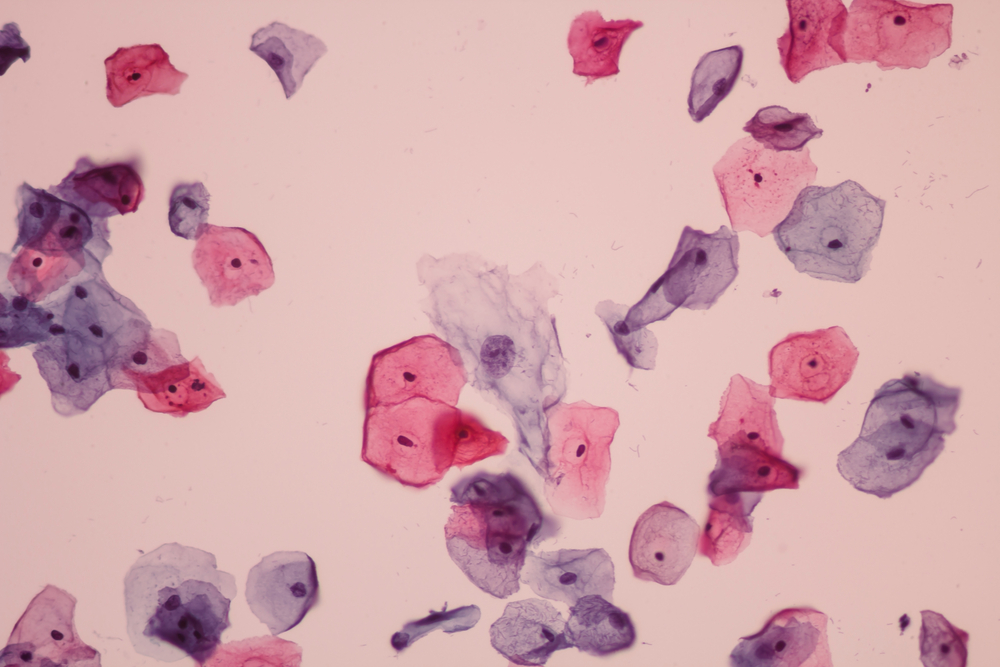 Cervical cancer is classified into two main types – the most common type (9 out of 10 cases) is squamous cell carcinoma which develops in the exocervix and has features of squamous cells when looked under a microscope, and adenocarcinomas that develop from the mucus-producing gland cells of the endocervix (a part of cervix that is closest to the body of uterus).

What are squamous cells?

Epithelium is a type of tissue that lines the outer surfaces of our body’s organs and inner surfaces of many internal organs. Epidermis, which is the outermost skin layer, is an example of epithelium.

Epithelial cells can be of three different shapes, namely, squamous, cuboidal and columnar.  In simple epithelium, any one of these shapes of cells is arranged in a single layer while in the stratified epithelium, there are two or more layers of cells.

Epithelial cells make up all glands in the body. These cells perform many functions including protection, secretion, sensing, absorption and transportation between cells.

Squamous cells have a scale-like, flat appearance and their width is more than their height. The word “squamous” is derived from a Latin word ‘squama’ which means “fish or serpent scales.”

What is cervical cancer?

Cervical cancer begins in the cells that line the cervix, which is the lower portion of the uterus or womb in women. Measuring about 2 to 3 centimetres in length, the cervix connects the uterus to the birth canal or vagina. The region of cervix close to the uterus is known as endocervix while the part of cervix closest to the vagina is called ectocervix.

Cervical cancer is grouped into two types: squamous cell carcinoma and adenocarcinoma based on how the cancer cells look under a microscope.

Squamous cell carcinomas are the most common type of cervical cancer and account for 80 percent of cases. These cancers begin in the squamous cells that are thin and flat cells that line the cervix.

Adenocarcinomas are formed in the glandular cells which are found in the upper region of the cervix and account for 20 percent of cases.

The cervical cells do not change into cancer suddenly but instead first develop pre-cancerous changes. These changes gradually turn into cancer.

A Pap smear test is done to find out the exact nature of these pre-cancerous changes which are then described as cervical intraepithelial neoplasia (CIN) or squamous intraepithelial lesion (SIL).

Cervical intraepithelial neoplasia or CIN are abnormal cells that are found on the surface of the cervix. CIN indicates abnormal changes in squamous cells that line the cervix but is not cancer.  It takes many years for these changes to turn into cancer and in many women, the abnormality resolves on its own.

CIN is classified into three grades that are based on how deeply these abnormal cells have penetrated the cervix lining.

Some possible risk factors of cervical cancer (SCC) include:

These symptoms can also be due to other conditions such as vaginal infection or hormonal imbalance. Your doctor will recommend the appropriate tests to find out the root cause of such symptoms.

Low-grade CIN usually resolves by itself and does not need treatment. Your doctor may recommend regular Pap smears to keep a check on the abnormal cells.

For high grade or severe CIN, treatment is focused on removing abnormal cells which can become cancerous.

For women who develop malignant features in the cervix, the treatment options include surgery (for very early stage cancer) or radiation with concurrent chemotherapy (for later stages) depending on the stage of the disease.

Talk Your Heart Out: Around India in Six Days