When you hear ‘skin cancer’ you don’t usually panic as much as blood cancer or lung cancer. Guess what? You really should.

My name is Kavya, and I have stage-2 cutaneous melanoma. That’s 4-millimeter skin cancer, with ulcerations. Last summer, my doctors told me that it was getting aggressive and that once it goes metastatic, the ‘prognosis’ was going to be very poor. 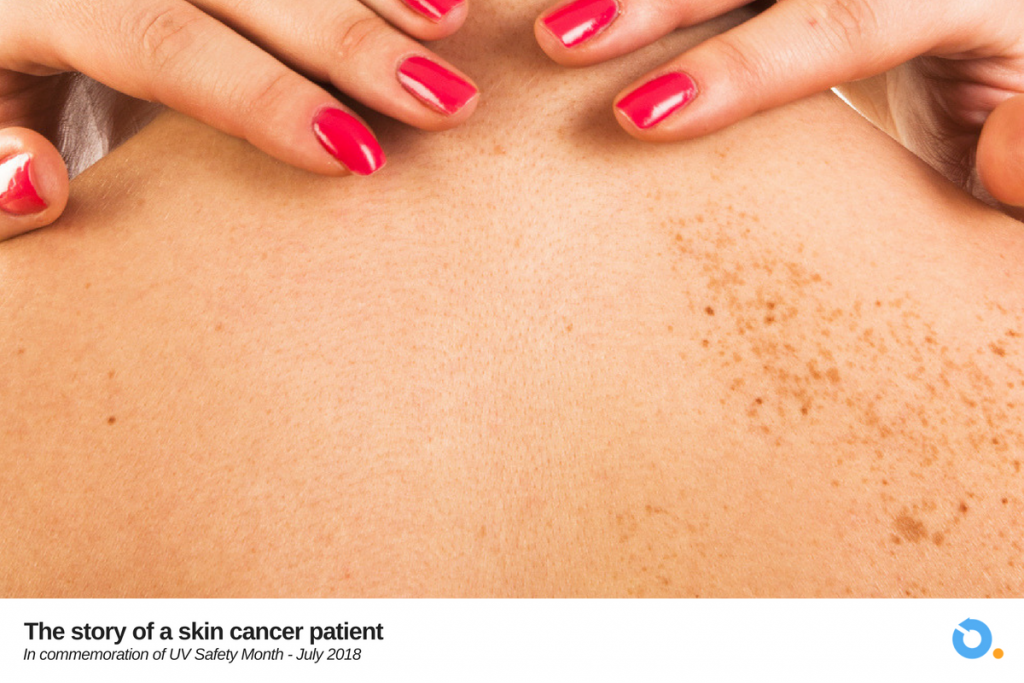 Right after my diagnosis was confirmed, I was ushered in for surgery and successive cycles of chemotherapy at the local ‘premiere’ hospital, which didn’t do much in terms of reducing or slowing the ulcerations down, but got rid of most of my natural hair, and set my family back by about twelve lakh rupees. That’s hardly what you have in mind when you hear ‘skin cancer’ for the first time. Thanks to the internet and the way we tend to focus on only ‘sensational’ facts, most people think cancer’s just serious when it’s in the lungs or breasts or in your blood. Compared to the top three, ‘skin cancer’ sounds like a rash. Well, it isn’t. It is deadly, it’s treatments are still being fine-tuned and you will never believe this –

In the US, there are more cases of skin cancer caused by indoor tanning, than there are lung cancer cases caused by smoking!

I read this on the internet, trying to find potential, rumored, in-progress, now-discontinued, any-type, all-types of treatments available for my plight and it really angered me, how people smoke, and how people get indoor tanning devices!

Off-topic, another thing I’ve been doing retrospective research on lately? Sunscreens. The letters S-P-F put together mean something entirely different for me now. Take it from someone who’s got skin cancer – don’t take UV too lightly.

But yeah – the internet. I couldn’t get enough of what people had to say on the subject. And I didn’t stop reading right until the time when I saw someone suggesting ‘placebo’ treatments on a forum thread, and I lost it. I was stuck in a small town in India harboring dreams of graduating from a top law school and making it big in corporate law. And here I was, through no fault of my own, succumbing to a disease I didn’t even know was ugly.

And here’s the weird part.

Nobody ‘prepares’ you for cancer.

It was sad to see my parents controlling their emotions around me initially, tiptoeing on facts and test results because no one in the family was a doctor – nobody understood the reports completely, nobody really knew what the doctor (or doctors) had in mind when they ordered my tests… you know, it’s not like malaria, because the science behind skin cancer is all about squamous cells, basal cells, melanocytes, BRAF gene… the list is endless.

How do you deal with something that scary?

I’m in my late teens, and I have faith in the way science is shaping up in the developed world. But my parents? They were scared to death and they’re extremely naive about anything that goes beyond ‘regular’ complex, specially in medical affairs. So after my stage-2 advancement, I decided to take things into my own hands and tried to figure out a way to talk to a doctor in the US.

I figured, if they (people in the US) have got more patients for this than they have for lung cancer, they are probably a lot more efficient at treating it! So I used this service, onco.com – Whatsapped all my scans to them, gave them a summary of the treatment I had received so far, including the recent progression, and they offered to setup a panel comprising an expert dermatologist, a surgical oncologist and a consultant medical oncologist, each with an Ivy League degree, to take a look at my case.

It took some time to convince dad, but something told me he was on board the minute I showed him my online research dump. He was proud, he said. I knew he held back a couple of tears, but in the end he was happy to shell out a few additional bucks (alright, dollars) before he had to ‘really pay for my future!’ (His words).

What the doctors said

Sometimes, you’re at a football match or a tennis tournament and you’re playing all the right moves, and it’s just not your game because something’s off, and you can’t figure out what it is. And then your coach, or your father sneaks up during an interval and says ‘You’re doing alright, champ!’ and then everything goes smooth.

Something similar happened here. I mean, the treatment really didn’t have to change all that much. Turns out, the developed world is playing around with a combination of chemotherapy, immunotherapy and placebo treatments for skin cancer. And while they take it slightly more seriously than a regular rash, the doctors found my case pretty much standard-issue, and said that the existing treatment should do just fine, supplemented with a few lifestyle changes (which I’ve listed below, should anyone be interested.) But the main thing is, I was able to read through my own diagnosis, understand that it’s another disease with its own set of metrics to map progression, stages, and now I’m not all that afraid. I know I’m getting the right treatment for it.

Did not need a viral, emotional, rage-rage-rage filled Twitter stream to get through the day. So…. thank you internet, I guess!

Before we end this, here are the keep-skin-cancer-away tips that the good doctors shared (I checked with them, it doesn’t just apply to me, if you want to steer clear of skin cancer, you should keep these in mind too!)

How to prevent skin cancer?

These are general recommendations to reduce risk of skin cancer:

That’s about it – thanks for letting me share my story, thanks to those who’ve been reading this far, and if you’re thinking about sharing this, you’re an angel! And as far as I’m concerned, I’m getting treated, I’m getting better and I’m going to make sure my dad gets to spend a lot at the best law school I can get into. Wish me luck!

Note from the Onco.com team

This article is an anglicised version of an interview with Kavya (name changed), a 15-year old melanoma patient whose parents availed Onco.com’s US panel consultation services, and was kind enough to let us publish her story. We encourage readers to stay alert about skin cancer and ways to prevent it.

Please note that this post is an anglicized transcript of a patient interview, containing the patient’s personal opinions, and is not representative of Onco.com’s views on the subject.