“My whole life played out before my eyes like a movie reel.”

That’s how Meenakshi felt when she found out she had cancer. There was confusion, disbelief and anxiety. But just a year and half later, she is able to narrate that moment with clarity and even humour.

Possibly, the first thing you notice about Meenakshi is her smile. Next you might notice that she is confident and can hold a conversation on just about any topic under the sun. She speaks nineteen to the dozen, and no matter what she is talking about, the listener feels drawn towards her friendly personality.

By the time she turned twenty years old, she had already figured her life out, from finding a job as a junior trainee engineer, to enjoying her weekends with her large circle of friends. She was happy and her family was proud of her.

In the blink of an eye, all of this changed. It took just one word to eclipse her near perfect life: cancer. Meenakshi was diagnosed with leukemia in late 2019. To someone who had no major illness thus far, the diagnosis felt unreal.

For a week before, Meenakshi was irritable at work. The otherwise chirpy and motivated employee, suddenly became grumpy and argumentative. She could not place her finger on the reason for this change in her temperament. But she noticed herself feeling very exhausted. She explained it away; it might because of work, or the long shifts or maybe she was missing home. But deep down she knew none of these reasons were quite true. 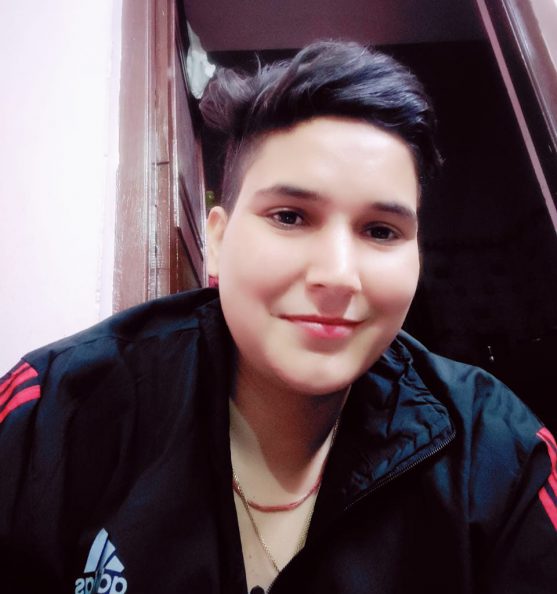 She started skipping meals. Her room mates thought it was because she was too tired to cook for herself. So they began cooking for her. Meenakshi found herself feeling nauseous when she ate.

These were strange symptoms, not too big to make you rush to a hospital, and not small enough to be forgotten. But by the end of the week, she felt a sudden pain in the left side of her abdomen. The scans did not reveal much, except for an enlarged spleen.

The doctor told Meenakshi that she probably had an infection of some sort, although it was not immediately clear what the infection was. By this point, Meenakshi was already scared. She had lost her cousin a few months back and he was the same age as her. She felt the need to go back to her family as soon as possible.

She decided that she would travel back home to Kota, Rajasthan, instead of awaiting the blood test results.

It took Meenakshi fifteen hours to make that journey back home. Her friends and colleagues got her on a train. She was too unwell to travel but she needed to get back to her family. They would know what was to be done.

By this point, she was vomiting most of what she was eating. So she decided to stick to fluids on the train. Armed with fruit juices and a lot of courage, Meenakshi bid adieu to her friends, one of whom has promised to call her after collecting her blood report.

Within a few hours of leaving the station, she received the expected call. But poor network and her own health made it hard for her to understand what was being said. She could only make out that her friend was insisting that she get off at the next station and return. He seemed to think that she was too sick to complete the journey.

Meenakshi wanted to get home to her family. So she refused to cut short the journey and asked for her blood reports to be forwarded to her. After initially refusing to do that, her friend gave in and sent her the reports.

The report said she has leukemia which is a type of blood cancer. Meenakshi didn’t know what to feel or think anymore. She was too shocked to even react. She saw her entire life pass before her eyes. Was this how it all ended, she wondered.

Meenakshi instinctively knew that the blood test report was not an error. No one would put down a cancer diagnosis without being thorough with the lab procedures. Yet, there was the hope that it might all be better than it seemed at this point. 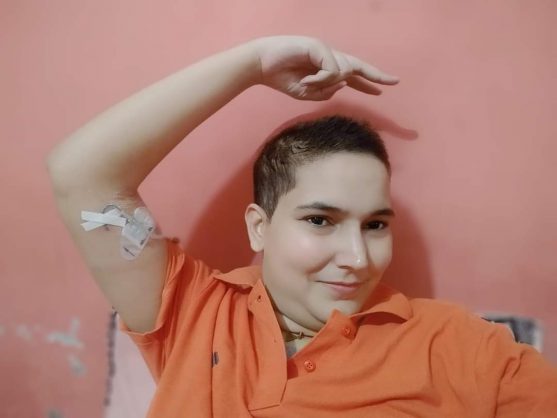 Being a natural optimist, Meenakshi felt she would survive whatever the problem was; cancer or otherwise. Once she was back home, her family made her feel stronger, even as they were themselves struggling with the diagnosis.

They took her for the test again, hoping that a different result might come out this time. But it was the same result. Everyone had to learn to accept the diagnosis and move to the next stage: the treatment.

Unable to find good options for cancer treatment in Kota, Meenakshi’s family decided to travel to Jaipur. They had to make this trip from Kota to Jaipur multiple times, for each doctor consultation, additional procedures, and for the treatment itself.

Leukemia brought with it several other issues from fistulas to wounds that would not heal. Additional surgeries had to be performed and the recovery process each time was lengthy and painstaking.

When she was admitted for surgeries, no visitors were allowed to meet her. This was because her immunity was very low and having visitors put her at higher risk. So she recovered alone, depending on her phone for support and entertainment.

Meenakshi’s family had no friends or extended family in Jaipur where the treatment was taking place. Yet they managed to network and find whatever they needed there. Meenakshi says, “My siblings are nothing less than God for me. They helped me through my toughest times. I needed blood transfusions innumerable times. Each time they managed to find the blood in time.” 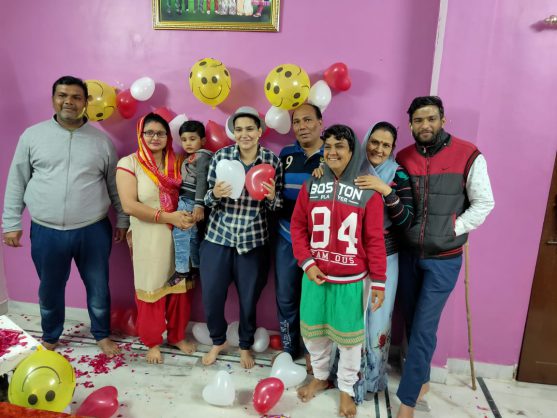 Meanwhile, Meenakshi’s family was dealing with sickness and recovery in many forms; her mother fell ill and was hospitalised, her sister-in-law needed medical attention too. There were times when Meenakshi became a caregiver while still being a patient as well. They all took turns to nurse each other back to health.

Isolated But Not Alone

Little did Meenakshi know what other plot twists awaited her. In Feb 2020, when the first cases of coronavirus started to appear, Meenakshi faced a new fear. Cancer patients are more susceptible to COVID and as a blood cancer patient, her risk was even higher.

In June 2020, Meenakshi needed a COVID report to be admitted to hospital for a routine cancer procedure. The COVID test was supposed to be a formality, but when the reports came back positive, Meenakshi faced her biggest fear.

She had heard several times that cancer patients face more serious consequences of COVID than others. She felt like she might only live for another two or three days.

She found herself in an isolation ward with senior citizens. She seemed to be the healthiest person in the ward as the others were much older and could not do much. She started helping them with the things they could not do on their own. Be it helping an older gentleman charge his phone, or accompanying an older lady to the bathroom as she could barely walk, Meenakshi found herself helping out in whatever way she could.

In return, she received the blessings of these people, along with a share of whatever fruits and juices came from their homes.

Meenakshi would monitor her own SpO2 and check her own temperature from time to time. She would heat her water and take her medicines on time. She knew that she had to take care of herself as her family could not visit her at this time.

Unbelievable as it seems, with a really low immunity level, this leukemia patient survived COVID-19, and returned home to continue with her cancer treatment.

The Long Road Ahead

Meenakshi is still currently under treatment, and will probably be for another year. There are times she looks back and wonders how she made it through all those nights alone in the hospital when no one was allowed to visit her. Then, there are times when she looks ahead and knows that if she could handle the past, she can handle the future too.

To keep herself motivated and to motivate the others around her, Meenakshi started a Youtube channel called ‘BoomBox IT is your channel’. She uses this channel to spread awareness about the early symptoms of cancer and to motivate other patients to keep fighting. 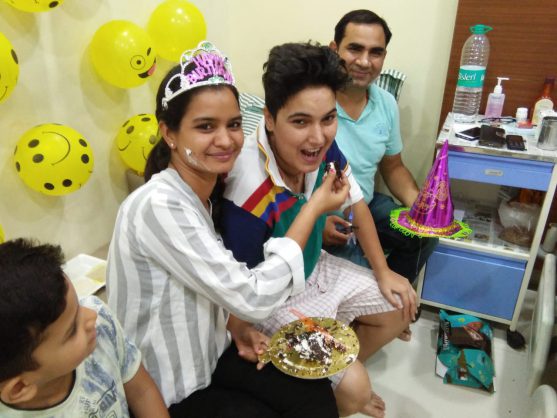 Meenakshi admits that everytime a friend visited her during the treatment, she instantly felt better. She says, “Many keep away from a cancer patient. They think it might disturb or make the patient uncomfortable if they visit them. But in my own experience, I have always felt better when I have a visitor. So go visit your sick friend. Don’t stay away. They need you now. You can talk to them or listen to them talk. Either way they will feel better.”

Due to the COVID-19 situation, most of us cannot visit our sick friends and family. But we can find ways to be with them virtually, and by helping them.

During these difficult times when we face a pandemic, Meenakshi is a reminder to all of us that we, the human race, are resilient. We have within us the innate instinct to survive against all odds. We have lost many dear to us, but many still remain. It is for their sake and our own that we need to keep up the good fight.

FAQs: Cancer Treatment in the Time of COVID-19

“Suffering is Optional”: The True Story of a...

How a Cancer Survivor Feeds Millions: The Story...

A Letter from a Lung Cancer Patient (Part...

A Letter from a Lung Cancer Patient

The Journey of a Breast Cancer Patient (Part...