The Diary of a Cancer Fighter: Mehul Vyas Records His Cancer Milestones

Mehul Vyas recorded his thoughts while he was undergoing treatment for stage IV, head and neck cancer. Here are excerpts to give you a peak into the soul of a cancer fighter.

Do you know what it’s like to be unable to breath? You draw air deeply into your nose but the air won’t reach your lungs. And the harder you try, the more it frustrates you.

The Aditya Birla Memorial Hospital in Pune is a large brown structure, with blue windows. It’s full of people trying to hold on to their lives, and not let it slide out from between their fingers. I am one of them.

There is a tumour on my right voice box, in my larynx, that makes me breathless. I have the ‘C’ word. No one likes to use it, as if even saying it out loud will invoke a demon. The word is feared. But I cannot afford to fear it.

I look at the picture of Jalaram on my phone. I remember visiting his temple a long time ago. I pray to find the strength to fight this demon.

An endoscopy, a biopsy, and a tracheostomy tube to help me breathe, are things I received this week.

I’m now in Columbus Ohio, at James Cancer Hospital, where I will be treated for stage IV cancer. The cancer has spread to my spine. Surgery to remove the voice box can no longer be done. The experiments with chemo begin.

There is a lot of pain, and it’s difficult to keep hoping. But I can’t let go and give up.

‘This is what you get for smoking.’ Who said that? Was it the look in the eyes of the people around me, or was it my own conscience condemning me? I used to chew gutka (tobacco) too.

I ran a travel agency for my family and a lot of time was spent around bus drivers who used to chew gutka. I picked up the habit and it was difficult to give it up.

And I drank as well. I gave in to alcohol when the business was not doing too well. Is this the price I’m paying for all of it? Will I get a chance to make up for it? 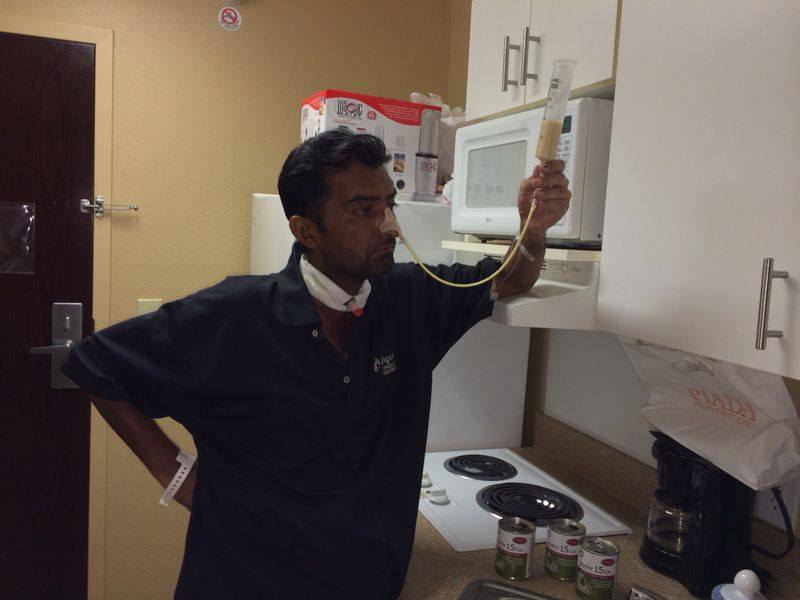 Insects crawl all over me

That is what chemo feels like; a hundred insects crawling over me. The dosage is strong and the doctor sits in front of the whole time. They don’t know how my body will react to the drugs and they want to be around in case of an emergency.

There is a volunteer who goes around the hospital to cover the patients with blankets. I feel strangely grateful to this volunteer. His kindness in covering me with a blanket during this time is overwhelming.

The insects are still crawling, and now my ears are buzzing with a ringing sound. It’s called tinnitus. These are all the effects of chemo. But I want them to pump me up with more of it, as much as it takes, to kill this cancer. 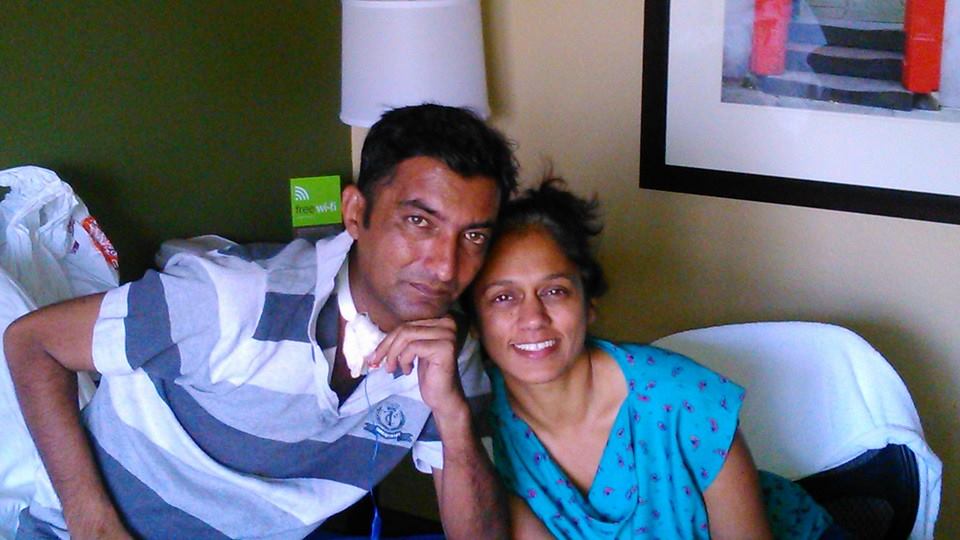 When everyone leaves, will you still stay with me?

My first round of chemotherapy has come to an end. I still have tubes running through me. I have more scans to take. The people who take my scans seem to be able to see right into me, deep into my soul.

The ringing in my ears continues. Anagha and I have discussed what to do in case I do not make it. We spoke about the finances and about how she will take care of Arjun and my parents. These are matters that need to be discussed.

Since cancer came into my life, a lot of people stopped communicating, some friends, some acquaintances, some relatives. It’s unexpected. You always imagine that people will be around at a time like this. But some people don’t know how to react to cancer. You can’t blame them. They can’t help it, maybe.

Shall I tell you something interesting about my wife? When we were in college, she used to be scared to get into a crowded bus. And now, she is here, traveling with me in this most terrifying journey.

She works hard at her job, takes care of our son and then she takes me for my treatment. She tells me, “Mehul, we’re going to beat this. Give me your word and promise that you and I are going to fight and beat this thing together.”

I hope I recover so I can give her all the joys she deserves. I have to repay her for all the time, love and money she has spent on me in these few months. I have to spend a happy and long life with her, and with Arjun.

If anything happens to me, I hope Anagha reads this diary. I would want Arjun also to read it when he grows up. 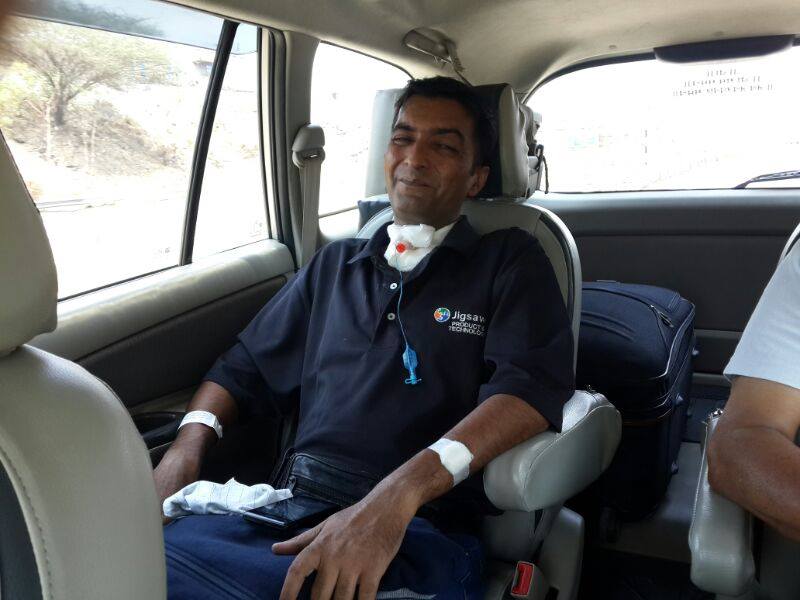 I’m fed up with this unending saga. All I feel is pain and weakness. I’m so medicated that I can’t feel much else. I eat or rather drink through a PET tube in my stomach.

I’m fed up of being dependent on others. I’m always connected to a PIC line. I need humidified oxygenated air and constant suction to relieve sudden airway obstruction in my trachea.

They draw blood from my veins almost daily. Not being able to talk is not something that is easy to get used to. When I need assistance, I can’t even ask for it. I’m desperately in need of air sometimes.

When I look at others, my friends from school, or from college, I look at their pictures on Facebook. I see them on holidays with their family. They are laughing, playing with their kids, eating, enjoying themselves. I feel jealous of their healthy life. I try to snap out of it but it’s difficult.

On some days, Anagha can’t understand what I am trying to say. She is very tired, and sometimes loses her temper. There is a lot on her plate. She is trying to manage everything.

Cancer is like an out of control teenager. It throws things everywhere and doesn’t listen to anything. It’s a struggle. And the hardest part is staying out of depression. It’s hard to pull yourself out of the negative feelings. 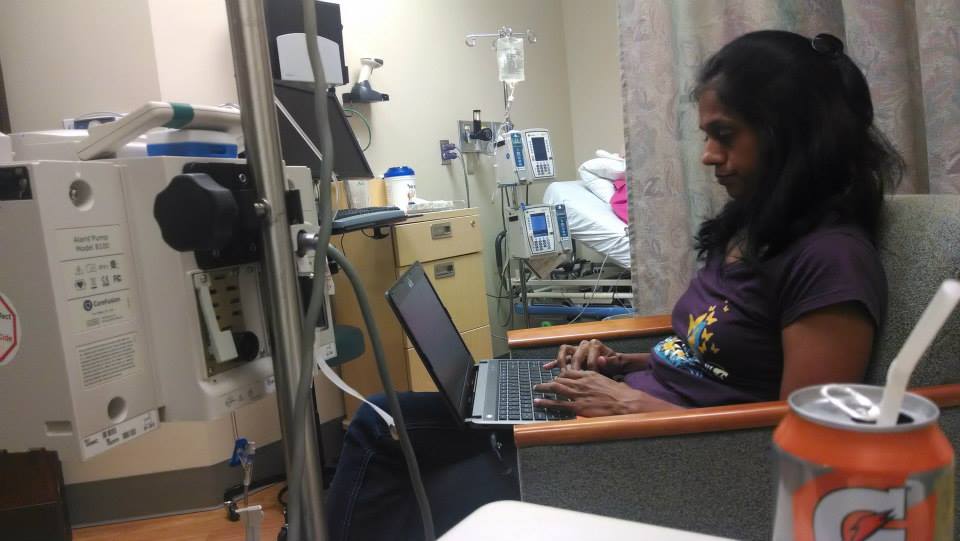 It’s snowing here in Columbus and the schools are closed. Arjun is home and will accompany us to the hospital today.

The best memories of my life are around Arjun. When I listen to him talk and laugh, I feel just wonderful. When Anagha cleans my tracheotomy wounds, Arjun sits next to her and says, “Do it gently. Don’t hurt baba. Do it slowly.” I hope I can be around for him. There is so much I have to tell him.

There is an old lady in the hospital, handing out balloons with ‘Get well soon’ written on them. I feel so grateful for that old lady. 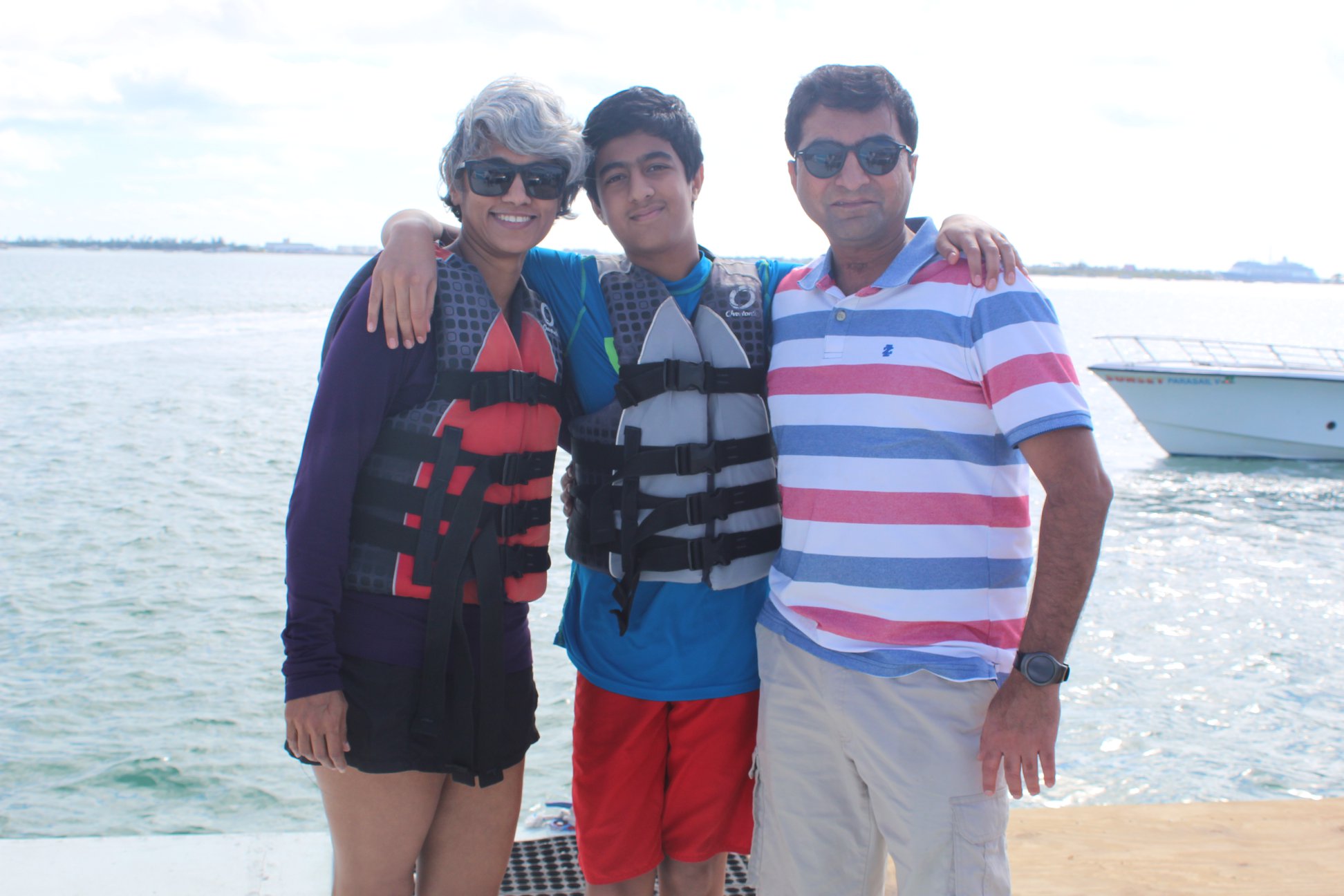 Cancer means crab in Greek. That’s because, a crab can move in all directions, just like cancer. And once it gets hold of you, it won’t let go.

Many people refer to cancer as the big ‘C’. Why do they not call diabetes as big ‘D’? Cancer is scary but talking about it makes it less scary.

I’m eating more healthy foods now, mostly fruits and vegetables. I do surya namaskar with Arjun every morning. He wanted to do 12 today, I could only do six.

Over these months, there is a lot I lost to cancer. I lost the time I should have been spending working and enjoying life with my family. I lost 30 kgs over three months. I lost 12 molars, six from my upper jaw and six from my lower jaw.

I also lost some friends and a lot of money to the treatment. But the most important things are still left with me, my life, my family and my hope for the future.

Here is something I have come to realise: It’s not about how much time I have. It’s about how much I do with it. I just want to be there for Arjun as he grows up, and I want to spend time with Anagha.

I will stop writing for now. Anagha has brought me ice-cream! 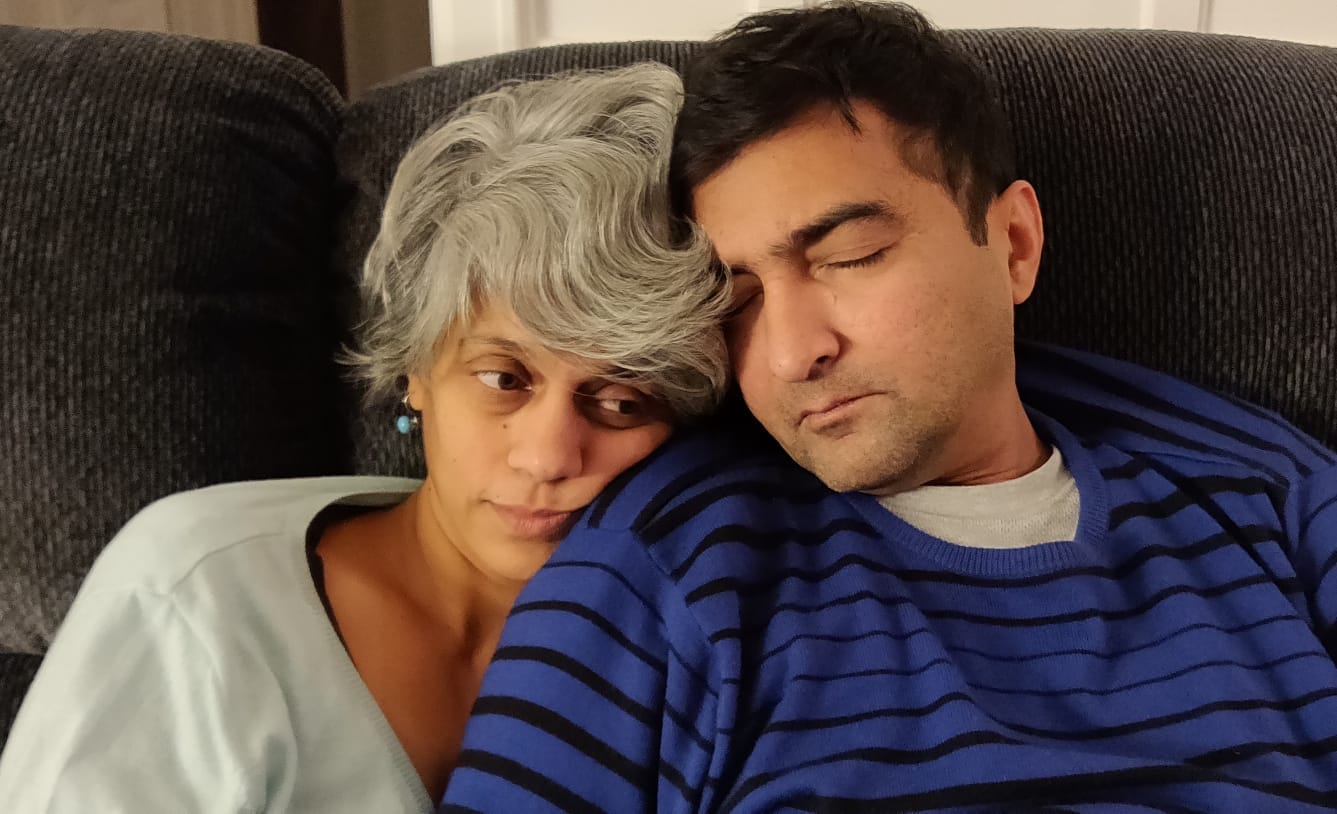 (Mehul completed his treatment  and now visits his oncologist for regular check-ups. He is able to speak clearly and has implants for all the molars he lost. He helps other cancer fighters as the admin of a popular cancer support group on social media. We wish him all the best as he continues to rebuild his life with his wife and son.)

Cancer Recurrence: What To Expect When Cancer Returns?