The Journey of a Breast Cancer Patient (Part 3): Lists and Lentils

You can read the Part 1 of this story here, and Part 2 here.

The Story So Far…    Seema’s life changed when she found a lump in her breast one morning. Her doctor confirms that it is breast cancer. Seema and her husband Rohan are still coming to terms with this. What will happen next?

The oncologist connected by Onco.com wanted to first confirm that the cancer was only in the left breast and had not spread anywhere else. For that, she prescribed Seema a complete metastatic workup. Seema then underwent a whole body PET CT scan to check if the cancer had spread elsewhere in the body.

The next few days after the diagnosis went by in a blur of activity. There was so much to be done. Words like diagnostic tests, metastatic work-up, PET CT scan and lymph nodes became part of Seema’s everyday vocabulary.

The care manager from Onco.com was available to help Seema and her husband with information on tests, preparing for the tests. Given a large network of diagnostic labs that Onco.com had partnered with, booking an appointment for her PET-CT scan was very easy for Seema.

Seema made notes for everything: what needed to be done, who needed to be informed, where she needed to go for each procedure … everything was arranged into neat little lists in her diary.

Akash told her how the PET scan is done and that overall procedure could take up to 2 hours, hence she can carry some light food to eat at the center once the test is done. She was asked to not eat anything on the morning of test and she could drink water. PET scan is generally planned for morning hours for this reason. As Seema reached the scan center, the staff took her details and checked her blood glucose levels (the test is postponed if the levels are high as high blood glucose interferes with uptake of test reagent) before she was taken inside for injection of radiolabelled glucose tracer (test reagent). After injection of test reagent she was asked to sit in a small room for the reagent to spread across her body through blood and the radiolabelled glucose gets distributed across the body organs. After around 40 minutes she was taken to the PET-CT scanner room where she was asked to lie down for testing and another scan dye was injected for contrast CT scan during the scan procedure. As the tracer reagent gets concentrated in the areas with high chemical activity, the tumour regions appear as glowing spots on the scan images. Sometimes areas of infections also show up with a glow but the doctors are mostly able to ascertain from the scan if it is so.

In a strange way, Seema was grateful that there was so much to be done. It kept her mind busy. She focused on questions that have answers, like ‘what is the stage of my cancer’ and ‘is it okay to visit an oncologist during this pandemic’. At the same time, she kept her focus away from questions that don’t have any answers, like ‘why did I get cancer’.

The results of the scan seemed to satisfy the oncologist.  “The cancer has not spread” said the doctor. Seema and her husband exhaled in relief. Who knew that a PET CT report could brighten up their mood!

Further, IHC (Immuno-histochemistry) for hormone receptors ER/PR/HER2 (to be done on the previous biopsy tissue blocks), and a fresh blood workup was prescribed. More answers were found. It was as if each test was giving them one more piece that fit into the jigsaw puzzle. The picture was taking shape before their eyes.

Next, the biopsy report was decoded. Seema was ER+ PR + and HER2-.

“What does that mean?” Seema heard her husband asking the oncologist.

“It means we can target specific hormone receptors that have been driving the growth of your cancer. I will add those drugs to the treatment plan”, the oncologist explained.

“The tumour in your left breast is about two to three cms in size, Seema”, the oncologist explained. “No axillary lymph nodes are involved.” Noticing the question mark on Seema’s face, she explained, “Your cancer is in the early stages. It has not spread out of the left breast and the hormone receptor reports are favourable which is all good news in terms of long term results. The outcomes for such cancers are generally very good.”

Seema began to see that there was a bright side to the picture after all. She had found that lump early on. That’s why her cancer was in the early stages. If she had ignored it or not paid enough attention, it would have been a far bigger problem.

And after all these positive responses, came the moment of truth. What exactly would the treatment involve?

“As your cancer is in an early stage, the initial step in your treatment plan will be surgery.

“For surgery, you have two options, Seema. I want you to listen carefully and understand your options fully. Then, you can decide which one you want to go with. It’s your choice.

“The first option is that you go for breast conservation surgery. In this surgery, we will retain your breast and only get the tumour out with clear healthy tissue margins and also remove axillary nodes. So you will not lose your breast while getting rid of the tumour.

“But if you choose this option, you MUST have radiation therapy later on. In radiation therapy, we will use high-energy X-ray beams, radiation is given to  remove any microscopic tumor deposits that remain after surgery and also to reduce the risk of the cancer returning to the same area of your body. There might be some side-effects on the skin on your breast, which should be manageable.

“In the second option, you can opt for MRM (Modified Radical Mastectomy), which means we will remove the entire breast and the axillary nodes. So you will lose your breast. You will mostly not need radiation therapy after MRM  if your post-surgery stage remains the same as it is now (sometimes we find extensive tumour deposits in the glands or lymph nodes of axilla). However, in case, if the stage is upgraded there would be a need for radiation therapy. The chance of this happening is rare but I want you to be informed of this possibility.

“You don’t need to decide now. Think about it and come back to me in a couple of days.”

Seema did not need a couple of days to decide. She already knew what she wanted, but she wanted to speak with her husband before making her decision known.

That evening, it took three lullabies and five and a half bedtime stories to finally get their son to fall asleep. And then, instead of settling down on the sofa for their favourite reality show, Seema and her husband sat down with notepads and pens to make ‘the decision’.

This is what Seema scribbled down: 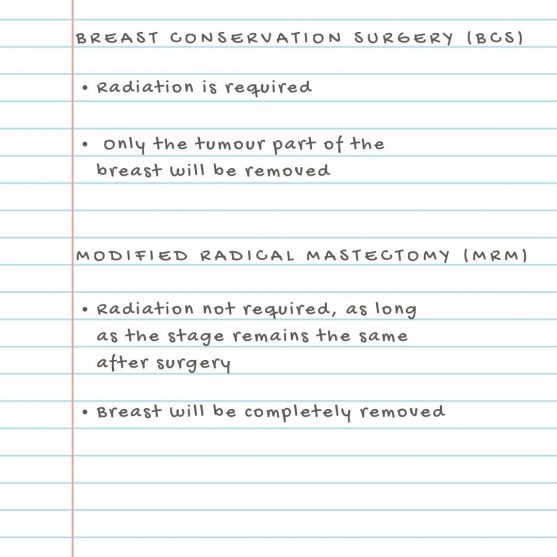 With that decision made, they began to prepare for the surgery.

The first step in this process was to check if their health insurance covered this surgery and what documents would need to be submitted to claim it.

Then, they would need to make arrangements for their son during the days when Seema would be in the hospital. Her mother had agreed to look after him. His things would need to be packed and his favourite storybook must not be forgotten or he gets mighty upset!

Then, the HR of the company she worked for had to be informed that she would need some medical leave. She decided to tell them the truth about why she needed that leave. She saw no point in hiding it anymore. Yes, she had cancer, and no, it was not the end of the world.

Seema then visited her favourite online clothing store to order some comfortable clothes to wear post-surgery.

The care manager informed them that the hospital would not accept any patient without a negative COVID-19 test report. So both Seema and her husband would have to take the COVID test just two days before the surgery so that they would have the results in time.

All the reports and results had to be filed neatly so that nothing was amiss and the surgical oncologist had all the required information. 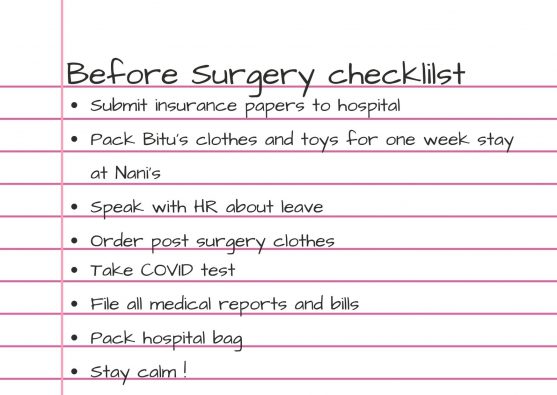 Seema was advised to not eat anything 8 hours prior to the surgery. She was also told to not take any new medication without asking her oncologist first.

Finally, after having taken care of all the little details, Seema and her husband sat down to pack her bag for the surgery. Her medical reports, her toiletries, some clothes, a pair of cozy socks (because the air conditioning always makes her feet cold) and her phone (with charger) were neatly placed in the bag. All jewellery was removed and left behind.

Her husband assured her that he would stay by her side during the entire hospital stay. Seema was very relieved to hear that. She realised now how much her husband’s support meant to her. She couldn’t imagine going through this journey without him by her side, every step of the way.

The last item on their to-do list was to pray before they left for the surgery. Accordingly, Seema and her husband folded hands to ask all the Gods they knew of to help them at this difficult hour. When she opened her eyes, she saw her husband was watching her pray.

“Are you scared?” he asked, studying her expression. The dam that was holding all her feelings inside burst open as she admitted to him, and to herself, that she was very scared. She thought she was handling it very well, until this moment.

While she was praying, it was not the face of any God, but her own son that was in front of her shut eyes. She really wanted to be near him. He needed her and she needed him. She had to be fine, for his sake.

Then he said everything he could to make her feel more confident, “It’s a small surgery. There’s really nothing to worry about. You will be back home before you know it. Then, I’ll make all your favourite dishes for you, even dal ki biryani.”

“Dal ki biryani?” Seema was laughing through her tears, “There’s no such thing!”

“There is! I found the recipe on a South African website!” said her husband excitedly.

And they were both laughing and crying at the same time.

At the hospital, the medical staff carried out the pre-anesthetic workup, including checking Seema’s blood pressure and heart rate. They were all normal and Seema was prepared for her surgery.

The surgery lasted about one and a half hours. After the first 12 hours, Seema was given a few sips of juice and asked to walk around for a bit. Then, she was put on a soft diet. On the third day, she was discharged from the hospital as her condition was fit to discharge.

You can read the next part of Seema’s story here.

Gems from our Cancer Support Circle: Physical and Mental Fitness During Cancer