Immunotherapy and precision medicine are improving outcomes of lung cancer treatments, but can we do MORE?

Lung cancer treatment is evolving continuously, thanks to better understanding and development of targeted approach.

Globally, lung cancer is the leading cause of cancer-related deaths. Chemotherapy, in general, remains the backbone for standard treatment of all advanced non–small cell lung cancer (NSCLC) patients, but this is rapidly changing with a better understanding of the molecular basis of the disease. 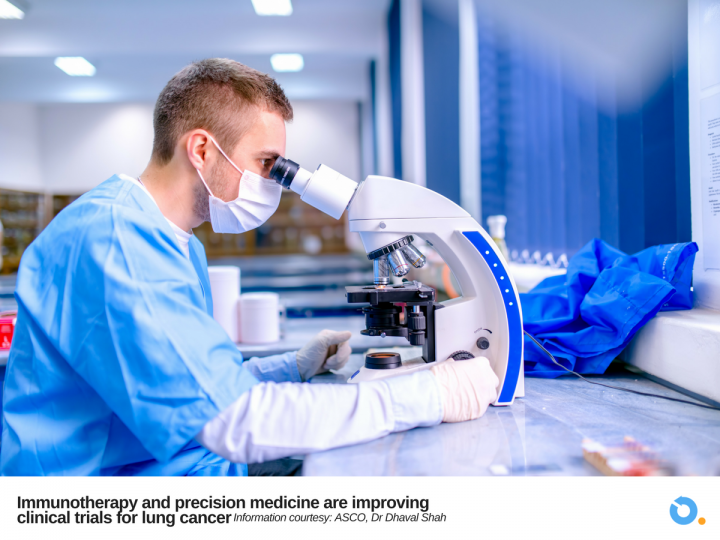 Note: This article derives its inputs from a publication[1] co-authored by Dr Dhaval Shah[2], an eminent Indian-American oncologist.

Over the past few years, “immune check point inhibitors” have rapidly changed the management of several cancers, including non-small cell lung cancer. Combination chemotherapy with immune check point inhibitors is now considered as the standard first line of treatment for advanced non-squamous NSCLC. Similarly, with the discovery of driver gene mutations, targeted therapies are considered to be the new standard of care in certain subgroups of patients, whose tumors harbor such mutations.

Many clinical trials across various developed nations now incorporate molecular testing and targeted therapies in their design; but as the demand soars to make clinical trials more adaptable, it has become imperative to include broader groups of patients under a single consent, and a single protocol. Newly designed clinical trials are rapidly trying to incorporate these changes.

What are randomized clinical trials (RCTs)?

Randomized clinical trials (or RCTs) are defined[3] as studies in which participants are divided (at random), into distinct groups for the purpose of comparing distinct treatments or other interventions.

“Using chance to divide people into groups means that the groups will be similar – and that the effects of treatments they receive can be compared more fairly. At the time of the trial, it is not known which treatment is best.” – NCI Guidelines[3:1]

Classically, RCTs have played an important role in improving the standard of care in oncology. Randomized trials are usually considered the “gold standard” to evaluate new therapies with a goal to establish overall survival rates and disease-specific survival rates as the primary endpoints.

Due to the mathematical nature of clinical trials, some large-scale studies may demonstrate positive outcomes just because they are statistically significant and not clinically impactful. The opposite of this is also true; sometimes a study can miss a targeted endpoint because it is too specific and small at scale, and because the recruited patients do not present with tumors containing the intended molecular profile. In today’s day and age, as the number of molecularly directed therapies continue to expand, it might be very impractical and expensive to conduct clinical trials with such microscopic precision. Patients’ survival rates cannot be the only endpoint either.

Biomarkers and other specific endpoints

Before randomized clinical trials became a commonplace for the approval of new targeted therapies, ‘biomarkers’[4] were used as the next-best alternative. They were useful because they served as objectiveindicators of the medical state of each patient as observed by a clinical professional (in contrast to symptoms – which are limited to indications of health or illness as perceived by patients themselves). Biomarkers, therefore, can make room for better end-points. Please note that randomized clinical trials are still mandatory for most drug approvals. Biomarker-driven trials and drug approvals today, need a formal phase-3 trial by the FDA. Biomarker driven endpoints may be useful for phase 1 and 2 trials.

By overcoming RCT-related barriers and by making endpoints more measurable and specific, the number of patients needed to demonstrate the effectiveness of a trial can go down. As a direct result, the number of sideeffects or unwanted outcomes from large-scale trials will also get reduced. The objective of next-generation clinical trials is to reduce suffering in patients, to make developments in leaps and bounds, and to outperform regular randomized studies.

“Research methodologies should change with the present era of precision medicine. With case selection possible through gene-mapping, we may not need traditional methods of statistics to determine the effectiveness of a new drug, and a lower bar should be acceptable in order to make better drugs available to patients, faster than ever before.”
–Dr Amit Jotwani (Senior radiation oncologist & co-founder, Onco.com)

Even through clinical trials are seeing rapid advancements, there are still gaps in terms of passing the benefits to end patients. This needs to be improved. Due to the limitations of traditional mapping practices, many research methodologies are not able to pass the benefits of their discoveries at scale.

Accordingly, future trials need to evolve. They need to be nimble in spending and adaptive to better endpoints, such as incorporating peripheral blood testing for molecular markers. That is the way forward for trials to keep up with the pace of changes in testing and drug availability. As targeted therapies become more common in early-stage lung cancer patients, clinical trials should also become more ‘personalized’ in order to evaluate the effects of these drugs more carefully and approve drugs faster.

It is equally important to keep a community of specialty oncologists perpetually engaged with all early-stage clinical trial developments. This will ease the implementation of the learnings, specially from complex trials.

Note: You can read the article originally authored by Dr Dhaval Shah, here.

Onco.com goes the extra-mile so you don’t have to – Liver cancer patient finds help in time of need

Cancer: Do we have the right information?

Reasons Behind Bleeding And Bruising During Cancer Treatment...

How To Find The Right Oncologist For You