Bleeding and bruising are side effects that may occur due to cancer treatments. Bleeding is the release of blood either outside the body or into a body cavity due to a broken blood vessel. Bruising is bleeding into the skin from damaged blood vessels due to trauma. Bruising often causes the appearance of black and blue coloured spots on the skin.

Why Do Patients Bleed And Bruise During Cancer Treatment?

Mostly, patients under cancer treatment will bleed and bruise due to low platelet count (also known as thrombocytopenia). Because platelets are the key to clot blood to stop bleeding. Other reasons for bleeding and bruising are liver problems, low vitamin K, or weak blood vessels. To treat thrombocytopenia, Your treating team will suggest platelet transfusion or prescribe medicines that stimulate the production of blood cells in the body.

Here Are Some Reasons For Bleeding And Bruising In Cancer Patients;

Cancer patients may experience bleeding and bruising due to any of the following:

Blood cancers (Leukemia and lymphoma), cancers that have spread to the liver, cancers of the spleen that makes the spleen bigger to hold platelets in it without circulating throughout the body, and cancers that have spread to bone marrow. All these cancers reduce the platelet count in the body and make the cancer patient face bleeding and bruising.

Not all cancer treatments cause bleeding and bruising. It depends upon treatment type and dose, medicines used, or site of treatment.

Chemotherapy: Chemotherapy may cause a decrease in the production of blood cells from bone marrow. This may result in a low platelet count.

Radiation Therapy: Bleeding and bruising are not side effects of all radiation treatments. But if radiotherapy is given along with chemotherapy or if you are receiving larger amounts of radiotherapy to the pelvic region, it decreases the platelet count.

Surgery: If you have undergone surgery for the removal of tumours, then bleeding and bruising happens as the most common side effects. You can observe the leaking of blood through the surgery site. If this condition worsens or the bleeding persists, inform your treating team and get immediate medical care.

Medicines like blood thinners (Heparin, Warfarin, etc) and NSAIDs (Aspirin, Ibuprofen, etc) increase the risk of bleeding. Ask your health care team to provide a list of medications to avoid during cancer treatment to prevent bleeding and bruising.

Antibodies: Antibodies are used to kill viruses and bacteria, but sometimes they are also involved in destroying healthy platelets resulting in low platelet count. So, ask your doctor before taking any vaccination.

What Are The Symptoms Of Bleeding And Bruising?

There are symptoms of bleeding and bruising that you should keep an eye on during cancer treatment. Inform your health care team if you are experiencing any of the below symptoms:

Deeper bleeding can result in;

How Bleeding And Bruising Can Be Treated?

There are some possible ways to treat bleeding and bruising or thrombocytopenia by your cancer care team;

Ex. Oprelvekin – Available as Neumega, is a blood cell growth factor approved by the FDA for the production of platelets in the body. 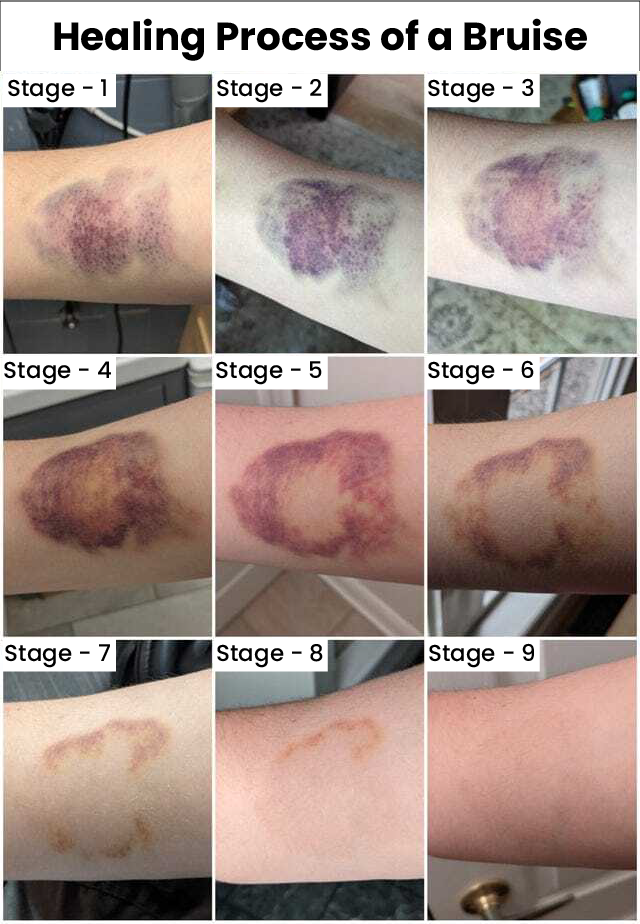 How To Prevent Bleeding And Bruising?

The treatments and preventive measures may vary based on the type and site of bleeding or bruising. Don’t forget to contact your health care team if you bleed or bruise more than usual and seek immediate medical attention.

Questions To Ask Your Doctor About Bleeding And Bruising:

Prepare yourself before your visit with the doctor by making notes of all questions you get during treatment. You can add the below questions on bleeding and bruising to your list;

How to prepare for your Consultation with an Oncologist