Pancreatic cancer is not as common as other cancer types, and ranks as the 14th most common cancer in the world. However, it is the 7th highest cancer-related cause of death globally. Why is the rate of mortality so high? In order to answer this question, we need to understand the anatomy as well as the function of the pancreas. 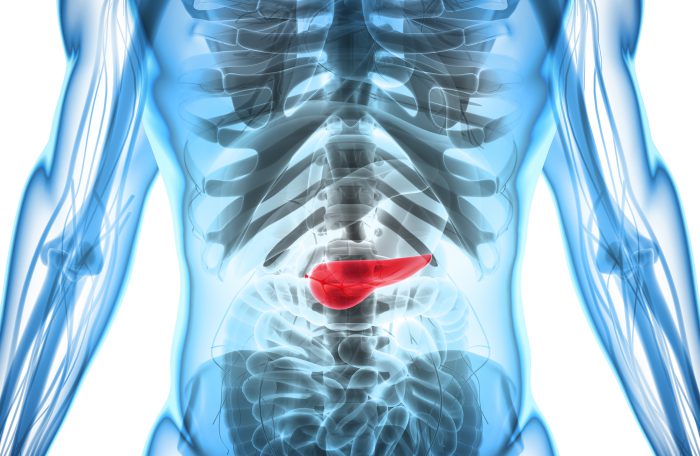 The pancreas is a j-shaped organ that is both exocrine and endocrine in function and is closely related to the liver, stomach and the small intestine, lying behind the stomach, across the abdomen. Pancreatic cancer is any cancer that originates within the pancreas and in most cases, they are adenocarcinomas that originate in the exocrine part of the organ.

Pancreatic cancer has a very low incidence rate and poor prognosis. The primary reason for this is the fact that this cancer shows no signs or symptoms in its early stages and is only diagnosed when it has reached the advanced stage. Apart from pancreatic cancer being silent in the early stages, diagnosing the condition is also difficult and challenging for healthcare professionals because there aren’t any specific or reliable screening tests that enable early detection of the condition. The failure to detect pancreatic cancer in its early stages results in its spread to nearby organs as well as metastasis to other parts of the body. And this complicates the treatment plans as well as the outcome.

When it comes to treating pancreatic cancer, it depends largely on the stage of the cancer, the type of cancer, age and the overall health of the patient. Here are some of the most common treatments used for pancreatic cancer:

The best and most successful treatment for pancreatic cancer is surgery, which is usually done when the cancer hasn’t spread outside of the pancreas. The entire cancerous portion can be removed without excessive damage. It is important, however, to understand that pancreatic surgery is complex, with patients facing a long recovery process after surgery. Hence, surgery will be a viable option only for those patients who have good overall health and will be able to withstand the procedure.

A ‘distal pancreatectomy’, on the other hand involves the removal of the tail and body of the pancreas. In some cases, this procedure also involves removal of the spleen, a part of the stomach, the left kidney, left adrenal gland etc.

In a ‘total pancreatectomy’, the entire pancreas and some of the surrounding organs are removed. The position of the tumour may make such a procedure necessary. Following this, the patient will need to take enzymes that help in the digestion of food. The patient may also suffer from diabetes, as insulin, the hormone that regulates blood sugar is also produced by the pancreas.

Radiation therapy involves the use of  X-rays or particle therapy to destroy cancerous cells. It is given for the following purposes:

Radiation is usually administered over several weeks. Radiotherapy causes certain side-effects, such as:

However, these side-effects are temporary and last only as long as you are being treated.

Chemotherapy is used in the following cases:

Immunotherapy is the use of medicines to stimulate the patient’s immune system to identify and fight cancerous cells. Drugs called checkpoint inhibitors are used on patients who test positively for certain gene changes. This therapy is used in cases where the cancer cannot be surgically removed, or when the cancer has already spread to other parts of the body or on recurrence.

Apart from these treatment options, the patient’s medical team also provides treatments to help them manage their symptoms such as pain and discomfort in order to improve their quality of life. Such treatments are called palliative care which also involves providing psychological support to the patient to enable them to maintain their mental wellbeing.

It is suggested that palliative care should begin along with the cancer treatment. The medical team should be able to explain the pros and cons of the treatment to the patient and their family. The prevention or management of the possible side-effects of the treatment is a part of palliative care. Additionally, it also helps the patient cope up with anxiety or depression that may accompany any long-term illness.

Palliative care caters to not just the patient but also the caregivers. It helps caregivers understand the duration and extent of the treatment, in order to help them prepare for it. It also enables better communication between the medical practitioners and the caregivers.

The success rate of the treatment for pancreatic cancer is largely dependent upon the stage and extent of the cancer itself, the overall health of the patient, and mainly, close assessment of the pros and cons of the treatment.

If you or anyone close to you is looking for the best options and advice regarding the treatment of pancreatic cancer, it is always safe to have a complete understanding of all the available treatments and their feasibility. At Onco.com, our multidisciplinary panel of oncologists and medical specialists can provide you with –

How are carcinoid tumours treated?