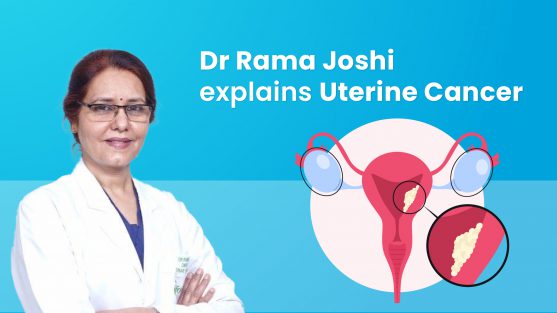 Uterine cancer also known as Endometrial cancer starts in the uterus, which is also called the womb. The uterus is a hollow organ, located between the bladder and the rectum.

Uterine cancer is the most common cancer occurring within a woman’s reproductive system. It occurs when cells in the uterus change and grow out of control, resulting in the formation of a tumour. 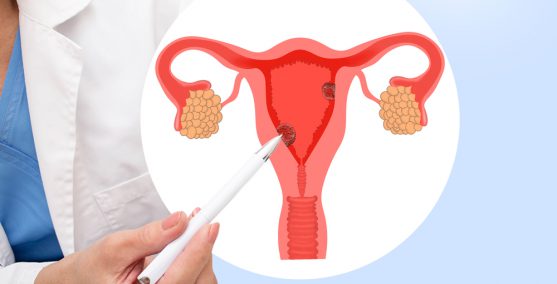 Am I at risk of developing uterine cancer?

While it is very difficult to predict who will develop uterine cancer and who will not, there are some factors which increase your risk of uterine cancer. Understanding and avoiding these factors can reduce your chances of developing uterine cancer.

Uterine cancer is mostly seen in women over the age of 50. But in some rare cases, even younger women develop uterine cancer.

Women who suffer from hypertension and diabetes have a higher risk of developing uterine cancer. Obesity is a risk factor for these diseases as well.

Women who have had treatments involving tamoxifen have a higher risk of uterine cancer. Tamoxifen is usually prescribed in the treatment of breast cancer.

Women who have undergone hormone replacement therapy to increase their estrogen levels for prolonged durations or in an unsupervised setting are at higher risk of uterine cancer.

Women who started their periods before the age of 12, and those who faced menopause only after the age of 50 are at higher risk of uterine cancer.

More than the actual age, the gap between these two ages is more indicative of a higher risk. Those who have a longer gap, are at higher risk.

Women  who have never been pregnant are also at a higher risk.

Does family history or genetics play a role?

Do I have uterine cancer?

With pelvic examination the doctor feels the uterus, vagina, ovaries, and rectum to check for any unusual findings and a transvaginal ultrasound is done to see  pictures of internal organs. If these tests suggest that cancer is present, an endometrial biopsy is performed.

Only an endometrial biopsy can confirm uterine cancer.

If a biopsy confirms the diagnosis, the doctor will order imaging tests such as a CT scan and  MRI.

It is to be noted that some women with endometrial cancer might not have any symptoms until the disease has spread to other organs.

If you have one or more of the above symptoms, you should consult your doctor at the earliest.

What does ‘stage’ mean?

As part of your diagnosis, your oncologist will need to find out the stage of your cancer.

Stage refers to the extent of the spread of the cancer inside your body.

There are four stages of uterine cancer.

Stage I indicates that the cancer has not spread outside of the uterus.

Stage II indicates that the tumor has spread from the uterus to the cervical stroma but not to other parts of the body.

Stage III indicates that the cancer has spread beyond the uterus, but it is still only in the pelvic area.

Stage IV indicates that the cancer has spread to other organs like the bladder rectum and/or distant organs.

The treatment for the cancer depends on the stage of the cancer.

That’s why it’s difficult to start treatment without first conducting a biopsy,  a complete clinical examination including a per vaginal examination and then other imaging studies CT and MRI to find out the stage of the cancer.

In the biopsy, a small sample of the cancerous tissue is collected and examined.

The resulting histopathological report and findings of the imaging reports will help your oncologist understand what course of action to take.

How is uterine cancer treated?

The treatment for uterine cancer will depend a lot on the stage of your cancer. In addition,  treatment will also depend on your age and other medical problems.

The treatment of uterine cancer usually involves surgery, with or without adjuvant therapies like radiation therapy and chemotherapy.

Surgery is the standard treatment for endometrial cancer that has not spread. Surgery involves removal of the uterus along with margins. Margins refer to the surrounding tissues that are also removed during surgery.

Sometimes the fallopian tubes, and ovaries may also be removed.

During this surgery, lymph nodes may be removed to check for spread.

A surgery for uterine cancer needs to be performed by a surgical oncologist or a gynecologic oncosurgeon.

Once the uterus is removed, pregnancy becomes impossible. Your doctor can advise you about the possibility of fertility preservation (especially for women who are young and want to have children in future).

This is a type of treatment in which high-energy beams are applied on a specific region to target the cancer cells present there. In uterine cancer, radiation is usually offered after surgery depending on the post operative biopsy report.

Radiation can be provided internally or externally, or both.

External beam radiation therapy (EBRT) directs the radiation at the cancer and surrounding tissue from outside the body. For cancer of the uterus, the lower abdominal area and pelvis are treated, but if the cancer has spread (metastasised), other areas may also be treated.

Internal radiation therapy may be used after a hysterectomy to deliver radiation directly to the top of the vagina (vaginal vault) from inside your body. This is known as vaginal vault brachytherapy.

Chemotherapy uses drugs to kill or slow the growth of cancer cells. The drugs travel throughout the body through the bloodstream.

Chemotherapy may be used for

What are the side-effects of these treatments?

Cancer treatment does bring with it certain side-effects depending on the type of treatment undergone.

With surgery, side-effects can include lymphedema (swelling in the legs), menopausal symptoms and loss of fertility.

Speak to your oncologist about how you can prepare for and manage these symptoms.

In addition to the short-term side effects, which usually resolve after the treatment is over, there can be few  long-term side effects that may not appear until months after treatment is completed. These include increased frequency of urination, irregular bowel movements, narrowing, scarring, and dryness of the vagina.

The most common side effects of chemotherapy include feeling tired, temporary hair loss, nausea and vomiting, diarrhea, low blood counts, menopausal symptoms, like hot flashes, night sweats, and vaginal dryness, numbness and tingling of the fingers and toes (called neuropathy).