Cytokine Release Syndrome (CRS) is the most common (and life-threatening) side effect of existing CAR T-Cell therapies for cancer treatment. Following recent approvals for targeted drugs that use this therapeutic technique for the treatment of Non Hodgkins Lymphoma, scientists have discovered[1] that this side effect can be controlled. 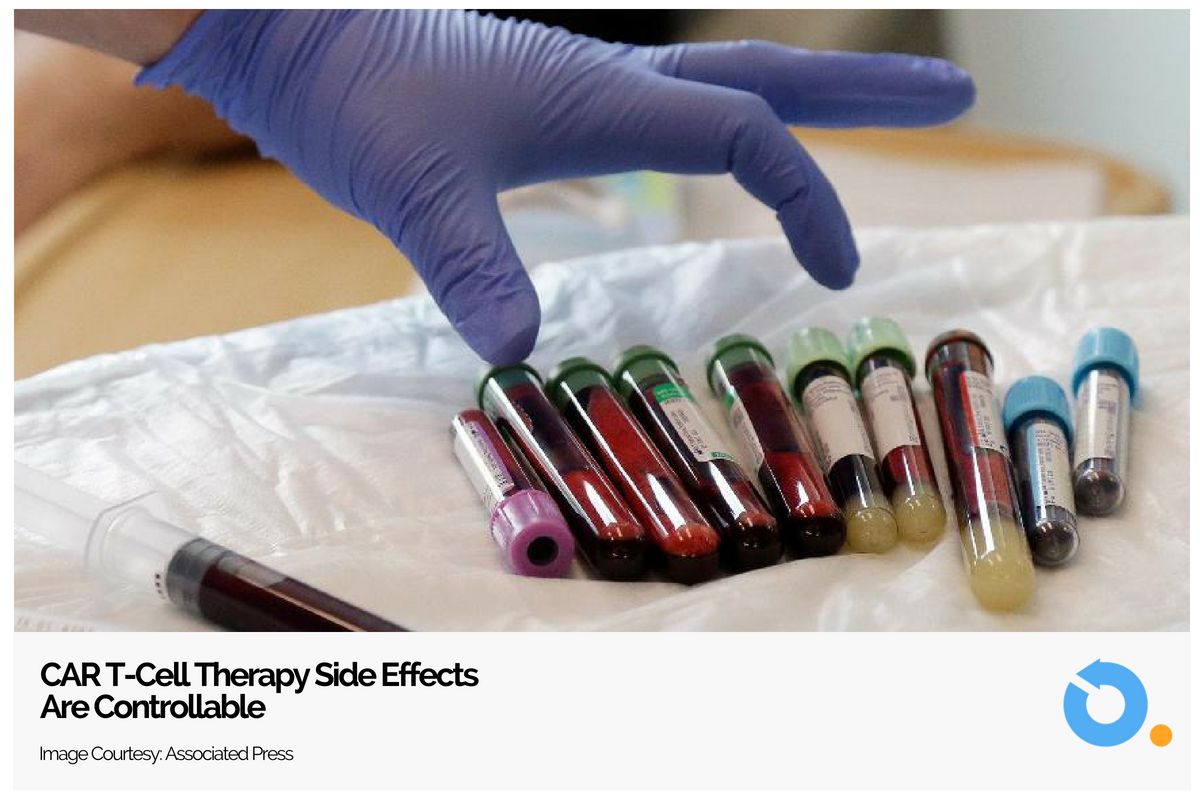 What are CAR T-Cell therapies?

CAR T-cell therapies are immunotherapy treatments that have been demonstrated to be extremely effective in treating both paediatric and adult leukaemia and certain types of lymphoma.

When we get sick with the common cold, our immune system attacks the infectious germs and kills them, effectively curing us. What is at work here are a type of cells present in our blood called T-cells. T-cells have the unique ability to identify affected cells, latch on to them and kill them.
For a long time, cancer researchers have wondered if it’s possible to train our immune system to kill cancer cells the same way, and effectively become cancer-free. This field of study, titled ‘Immunotherapy’ has been widely researched, and Chimeric Antigen Receptor (CAR) T-Cell Therapies are one of the most exciting advancements in this field.

Many scientists refer to CAR T-Cell Therapies as ‘Living Drugs’ because they constantly attach cancer cells, thereby reducing the rates of recurrence/relapse significantly.

During CAR T-Cell therapy, these substances are released in high amounts, causing a sever immune response. It can enable a rapid and voluminous release of cytokines into the bloodstream, manifesting into mild, severe, or life-threatening symptoms such as fever, nausea, headache, rash, rapid heartbeat, low blood pressure, and breathing troubles for cancer patients. This results in treatment toxicity.[2] This is known as Cytokine Release Syndrome, or CRS.

CRS as a CAR T-Cell therapy side effect

CRS was an unexpected side effect[3] discovered during the initial trials of CAR T-cell therapies.

It proved fatal for some trial patients, and consequently led the FDA to impose limitations[4] on the use of CAR T-cells.

CRS and other side effects often act as stumbling blocks for CAR T-cell therapies, which are light years ahead of conventional treatment regimens such as chemotherapy.

“This side effect requires specific care and medical staff have to be trained to manage this complication if it occurs. – it’s a very central issue in CAR T-cell therapies. This is the key complication that limits the broad use of this therapy. Use is confined to expert centers because they need to be able to manage these side effects.” – Dr Michel Sadelain (Director of the Center for Cell Engineering at Memorial Sloan Kettering Cancer Centre)

Existing solutions to the CRS problem

Today, when patients present CRS symptoms, doctors usually administer a drug to block the IL-6 cytokine, followed by the use of corticosteroids if this doesn’t work. The general understanding of CRS, however, was limited before teams at New York and Milan (Italy) created a ‘mouse model’ for the syndrome.

The most important discovery within these animal trial models, was that T-cells are not responsible for producing cytokines.

Cytokines were being produced by what scientists call a ‘macrophage’. A macrophage is a large, stationary cell found at sites of infection in the human body. These cells protect the body by ingesting other harmful foreign particles such as bacteria, and dead or nearly-dead cells.

“The phenomenon of CRS had not been fully understood so it was really useful to come up with animal models. The first surprise was that the main cell producing IL-6 was the macrophage, not T-cells. We engineered IL-1 blocking into the T-cells, so we don’t need to give extra treatments. We need to go and test this in clinical trials to find the most effective way to reduce the severity of or prevent the occurrence of CRS.” – Dr Michel Sadelain

Both the New York and Milan-based teams[1:1] were able to block the cytokines from macrophages using IL-1 and IL-6 blocking drugs in the experimental mice. And while the research itself is extremely promising, it also needs to be understood whether blocking cytokines on this regimen will also affect the effectiveness of the CAR T-cell therapy itself. As of now, according to Dr Sadelain and his team, the clinical priority is to control the elements of sever toxicity, in order to make the treatment more acceptable. He confirms that he is aware of the dilemma that comes afterwards.

“If you block a cytokine, you have to be sure you aren’t modifying the efficacy of the treatment. As to whether it reduces the efficacy of the CAR T cells, this might take a long time to know as the impact might not be immediately obvious.” – Dr Michel Sadelain.

If scientists are eventually able to reproduce these effects in people, it might pave the way for toxicity-free CAR T-cell therapies that do not depend on continuous CRS monitoring and management.

Learn how Venetoclax is improving survival rates for CLL patients