What Side Effects To Expect During Radiation Therapy?

The author of this post, Dr Rejil Rajan, is a Consultant Oncologist with Onco.com.

Radiation therapy is a treatment modality that delivers high energy electromagnetic waves or particles like gamma rays, X-rays, electrons or protons to kill cancer cells. Radiation therapy was first used to treat cancer over a century ago. Since then, huge progress has been made to improve the effectiveness of this modality and minimize side effects. It can be used alone or in combination with other treatment options for treating different cancers.

Radiation therapy involves the use of high-energy beams to damage cancer cells’ DNA, thereby, restricting their growth and division or causing direct damage. It may be delivered externally using linear accelerator machines or internally via radioactive sources placed inside or next to the area requiring treatment. 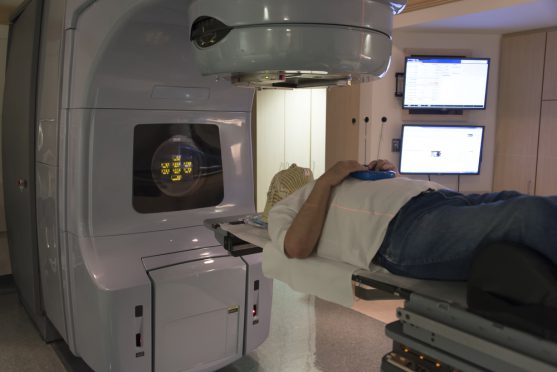 Side effects or toxicities of radiation therapy

Similar to any other cancer treatment, radiation therapy can damage healthy cells along with the cancer cells in and around the treatment area, and cause side effects.

The side effect will depend on the type and location of cancer, the dose of radiation being given, general health of the patient, effect of other cancer treatments, such as surgery and chemotherapy. Also, the severity of side effects may differ from patient to patient. Some may experience few or even no side effects from radiation therapy, while others may experience severe side effects.

In this article we will discuss in brief the acute side effects of radiation therapy.

Of those receiving radiation therapy, as many as 95% may experience some form of radiation dermatitis, or skin toxicity. The skin changes progress from dryness, itching, dark colouration to peeling off, which starts with peeling of dry skin (painless) which is called as dry desquamation and later progresses to exposing a deeper skin layer (dermis layer of skin) with serous discharge and is painful, which is called as wet desquamation. Very rarely, if further progresses, serious side effects like ulcer formation or bleeding may occur.

Skin reaction and time of onset:

During a radiation therapy course, a weekly review is mostly carried out by your doctor to assess the grades of toxicity and depending on the grades or severity of toxicity, he may start symptomatic medicines to provide relief.

If the toxicity is severe, usually grade 3 and above, your doctor will pause radiation therapy for a period of time and will resume it once the toxicity settles down.

Here we will look into the grading.

Oral mucositis starts as redness which progresses to patchy small ulcers and which later coalesce to form a bigger ulcer with severe pain. Very rarely, if it further progresses, serious side effects like deep ulcer formation or bleeding may occur. As the severity of mucositis increases,  pain and difficulty in swallowing also increases.

If the toxicity is severe, usually grade 3 and above, your doctor will pause radiation therapy for a period of time and will resume it once the toxicity settles down.

Factors affecting bladder toxicity include radiation dose and the technique of radiation. More conformal techniques like IMRT have shown to reduce the toxicity.

Radiation therapy to brain is used to treat patients with primary or metastatic brain tumors and also to reduce the risk of cancer cells spread to brain (prophylactic cranial irradiation). Factors affecting toxicity depend on the volume of normal brain tissue treated, the total radiation dose, fractionation schedule and use of concurrent or sequential chemotherapy.  The symptoms include headache, nausea and vomiting, worsening of preexisting neurological symptoms may happen.

These effects are due to irradiation of both the major (parotid, submandibular, sublingual) salivary glands and the minor salivary glands during treatment for head and neck cancers. Approximately 70% of patients receiving head and neck radiotherapy develop toxicity. Temporary decreased saliva production becomes evident within one to two weeks after the initiation of RT. The severity of the damage depends on the salivary function before treatment, the area of salivary tissue exposed, the total dose radiation and response of each individual. The symptoms include dryness of mouth or thick, sticky saliva and altered taste.

Acute side effects or toxicities of radiation therapy are temporary which means the majority of these side effects fade away within a few weeks after completion of the treatment.

Managing the side effects associated with the radiation therapy is a crucial step. It is important for the patient to maintain a positive attitude during and after the treatment and this is very much possible under the constant guidance of your treating team.