Is Biopsy Important for Cancer Treatment?

A biopsy is one among the many tests used to diagnose cancer.

It involves removal of a tissue sample, which is subjected to different types of examinations to confirm if there is  cancer. The biopsy results can help the oncologist know the cancer type and plan the best treatment for the patient.

What is a biopsy?

A biopsy is a minimally-invasive procedure where a sample of cells or tissue is removed from the body. This sample is then observed under a microscope to check for any abnormal cells.

A Biopsy is recommended if something suspicious is found during a physical exam or during other tests, or if the symptoms of the patient indicate a condition of concern. This test can help diagnose cancer and other illnesses.

A biopsy is required to confirm most types of cancers.

There are many types of biopsies. Based on the extent of intervention needed, some biopsies can be performed as a day-care procedure at the doctors’ office, while others may need to be performed in an operation theatre under anaesthesia.

When is a biopsy required?

A biopsy is usually recommended when there is an unusual finding from a physical examination or any other tests. This may include the following conditions:

There are many reasons why a biopsy may have been recommended for you. The type of biopsy prescribed will depend on the symptoms that you are facing.

How does a biopsy detect cancer?

During a biopsy, the sample cells are taken and observed under a microscope. The microscopic characteristics of the cancer cells and a normal, healthy cell differs. This helps us detect if there are any cancer cells present among the sampled cells. 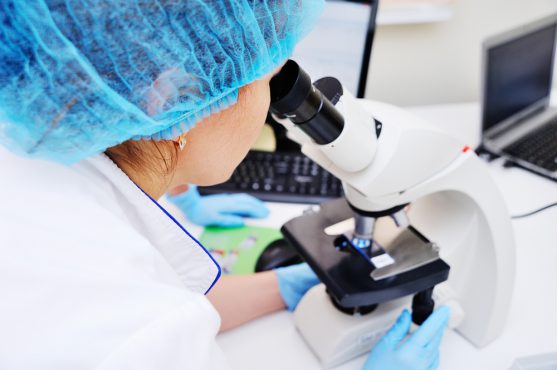 Generally, the microscopic examination of the cells indicate cancer if:

A biopsy can help determine the type of cancer, depending on how they look under the microscope. The cancers are named according to the type of normal cells they resemble the most.

There are various types of biopsies, and almost all of them involve using a sharp tool. If the biopsy is performed on the skin or any other sensitive region, a numbing medicine is applied before the procedure.

The following are the different types of biopsies for cancer diagnosis:

For this type of biopsy, a very thin, hollow needle is used, which is attached to a syringe to collect a small amount of cellular sample. It is used for a mass that can be felt through the skin, such as enlarged lymph nodes and suspicious breast lumps.

During this procedure, a large and slightly thicker needle is used to remove a tissue sample, similar to a fine needle aspiration biopsy. The tissue sample obtained is more which helps the pathologist to better confirm the diagnosis and subject it to other tests that help further characterise the tumor type and biology. This is the preferred biopsy technique commonly used in breast lumps or any other larger swelling seen on limbs and trunk.

An image-guided biopsy may be used when a tumour cannot be felt and involves organs such as lung, liver, or prostate which cannot be accessible for a blind biopsy.

During this procedure, a needle is guided to the location with the help of an imaging technique, such as ultrasound, computed tomography (CT) scan, fluoroscopy, X-ray, or magnetic resonance imaging (MRI) scan.

This type of biopsy can be performed using core, fine needle, or vacuum-assisted device, depending on the possible diagnoses, amount of tissue required, and other factors.

In this type of biopsy, a suction device is used to collect a tissue sample via a specially designed needle. This method can be used to collect large or multiple samples from the same site.

Sometimes a vacuum-assisted biopsy can be performed with the guidance of imaging techniques.

During this type of biopsy, the entire suspicious area is removed. It is usually used for suspicious changes in a mole on the skin but can also be used for  small tumours under the skin which can be easily removed.

For shave biopsy, a sharp tool is used to remove the tissue from the skin surface.

This type of biopsy involves the insertion of a sharp, circular tool into the skin to obtain a sample from under the skin surface.

A thin, flexible tube with a light and a small camera is known as an endoscope.  This tool is used to view the organs or tissues of the body, such as the gastrointestinal tract, abdomen, bladder or joints, and to detect any abnormalities.

An endoscope is inserted through the mouth, nostril, rectum, or urinary tract. A small sample of the tissue can be taken by using the forceps of the endoscope.

Like an endoscopic biopsy, a thin tube with a video camera, known as a laparoscope, is used to view the abdomen. This tool is inserted through a tiny incision on the abdomen.

Any abnormal areas in the abdomen are detected and a tissue sample is taken using laparoscopic instruments or by inserting a small needle.

Bone marrow is a spongy material present inside some of the large bones; it is the site where blood cells are produced.

Bone marrow biopsy is recommended to detect any abnormality in the blood or to determine if cancer has originated from or spread to the bone marrow.

During a bone marrow biopsy, a long needle is used to draw a sample of bone marrow from the back of the patient’s hip bone. This procedure is performed under local anaesthesia.

It is a simple and non-invasive biopsy alternative to surgical biopsies.

For this type of biopsy, a sample of the blood and fluid collection due to cancer like  pleural fluid is collected and analysed in a specific way.

This procedure can be performed multiple times, it allows to check the progress of the tumour and effectiveness of the treatment, and has less risks compared to a tissue biopsy.

Traces of cancer DNA in the blood can give clues about which treatments are most likely to work for the patient. However, liquid biopsy requires validation through more research and is not used for most people with cancer.

How To Find The Right Oncologist For You