Risk Factors of Testicular Cancer: What Men Should Know

Cancer is an unforgiving enemy that is hard to comprehend and difficult to talk about. Cancer can happen at any age, and even to persons who seem healthy.

Fortunately, among all cancers, testicular cancer is an easily treatable and relatively rare neoplasm.  While the disease can affect men of all ages,  including babies, it is more common among young men aged between  15-34 years.

It is still a mystery why some men develop testicular cancer while others don’t. We do not yet know the exact cause of the condition. Apparently, the blame falls on some specific factors that might increase one’s chances of developing this type of cancer.  We will look at these factors in this article.

Compared to other cancers, men diagnosed with testicular cancer have a good prognosis and excellent survival rate of nearly 95 percent. However, you must take certain steps to detect the disease early to ensure you get timely treatment and get completely cured. 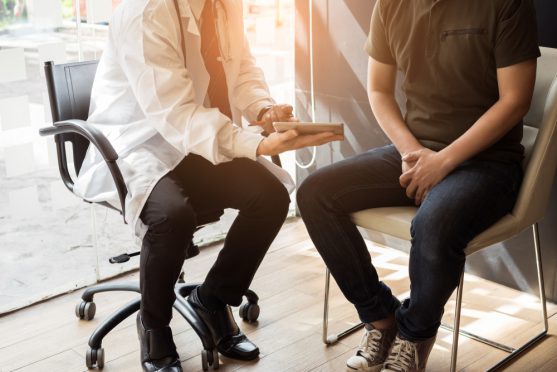 What is testicular cancer?

Testicular cancer develops when the cells inside the testes grow and divide abnormally.

Testes or testicles are the two egg-shaped glands held in a sac (scrotum) below the penis.  They are the part of the male reproductive system where sperms are produced and mature.

Testicles are also responsible for producing the hormone testosterone, which controls sex drive and promotes muscle, bone, and hair growth in men.

Each testis has a long-coiled tube called epididymis at the back where sperms are stored until discharged.

About 95% of testicular cancers are germ cell tumors that are categorized into two main subtypes: seminoma and non-seminoma. While both types occur nearly at the same rate, seminoma cancers are less aggressive and are treatment-sensitive.

A mixed type of testicular cancer has both seminoma and non-seminoma cells and is usually treated as non-seminoma.

Testicular cancer is an extremely uncommon disease worldwide, accounting for only 1-2 percent of all cancers in men.

While a man’s risk of getting the disease is about 1 in 250, his chance of dying from it is even smaller (1 in 5000), thanks to multimodal treatment approaches.

However, evidence suggests that the incidence of testicular cancer is increasing yearly, particularly in industrialized nations. According to reports, the number of cases has doubled in the last four decades, with 6.3 per 100,000 people in 2017 compared to 3.7 per 100,000 in 1975.

How do I know if I have testicular cancer?

Most men with testicular cancer may not have visible signs and symptoms. Some men, however, may have a firm palpable painless mass that could grow over time.

Here are come of the symptoms of testicular cancer:

Tenderness or enlargement of the breast is a rare symptom of testicular cancer.

The most common symptoms a man may experience in the advanced stages are coughing, troubled breathing, difficulty swallowing, chest pain, bloody sputum, and lower back pain.

What are the factors that increase our risk of testicular cancer?

A risk factor is a type of correlate that determines a person’s chance of developing a disease or an infection. Although we do not know what causes most cases of testicular cancer, scientists have established certain factors that can increase a man’s risk of the disease.

Some of these potential factors are listed below:

This is one of the major risk factors and a common birth abnormality that people aren’t aware of.

During normal foetal development, the testicles develop inside the abdomen and descend spontaneously into the scrotum before or shortly after birth. But in some men, the gland stays in the abdomen and does not drop down, or it may descend part way towards the scrotum near the groin area.

Men with undescended testicles have nearly 2-6 times higher risk of getting testicular cancer than the others.  While surgery (orchiopexy)carried out in early childhood, preferably before the first birthday, may resolve the problem, the risk continues even after.

However, keep in mind that this occurs in a tiny small percentage of families.

A few studies have found that men with human immunodeficiency virus (HIV) or AIDS have an increased risk of developing seminoma type of testicular cancer. Other recent studies, however, have not found similar results.

Also called intratubular germ cell neoplasia, this is a precancerous stage of testicular cancer in which the germ cells appear abnormal under a microscope but haven’t spread beyond the walls of the seminiferous tubules (where sperm cells are formed) of the testicles.

CIS itself is not cancer; however, in most cases, it may progress to an invasive stage if left untreated.

If you have a history of treated testicular cancer for one of your testicles, you are 12-18 times more likely to develop secondary cancer in the other.

Testicular cancer is more common in certain racial and social groups. Men in the United States and Europe are more likely to develop testicular cancer than men in Asia and Africa.

Compared to other ethnicities, white men have a 4-5 times greater risk of getting testicular cancer. Even American Indians are at some risk, Though it is lower than that of white men. They are prone to develop seminoma cancer.

Although not widely supported, taller men appear to have a higher risk of developing testicular cancer than those with average height.

Men with genetic diseases such as Klinefelter syndrome have an increased risk of testicular cancer because of an extra copy of a chromosome that creates a genetic disbalance.

Several studies have found that firefighters and aircraft maintenance workers are at a higher risk of developing testicular cancer. However, the precise mechanism underlying this association is unknown.

Working in agricultural-related occupations has also been linked to increased risks, especially among young boys. But again, this has not been thoroughly researched and warrants further investigation.

A substantial body of evidence relates to the role of various environmental exposures, such as:

The above, either alone or in combination, can indicate the development of testicular cancer. However, a causal link has not been clearly established.

How can I prevent testicular cancer?

Testicular cancer cannot be avoided. But that doesn’t mean you shouldn’t be aware of your potential risks.

While not all doctors agree, learning about the various symptoms of testicular cancer through self-examination is the best way to detect the tumor early.

Consult your doctor if you are unsure about anything you see or feel so that you can make the best decision for your health.

In Search Of #CancerWoman – Confessions Of A...