All About Cholangiocarcinoma (Bile Duct Cancer)

Cholangiocarcinoma or bile duct cancer is a rare, aggressive group of tumours that can originate anywhere in the bile ducts.

Bile ducts are a network of tubes that connect the liver and gallbladder to the small intestine. The main role of the bile duct is to carry bile (a fluid produced by the liver) into the small bowel, where it helps digest fats in food.

What are the parts of the bile duct system?

The combined ducts open into the small bowel, where bile is released.

Are there different types of cholangiocarcinoma? 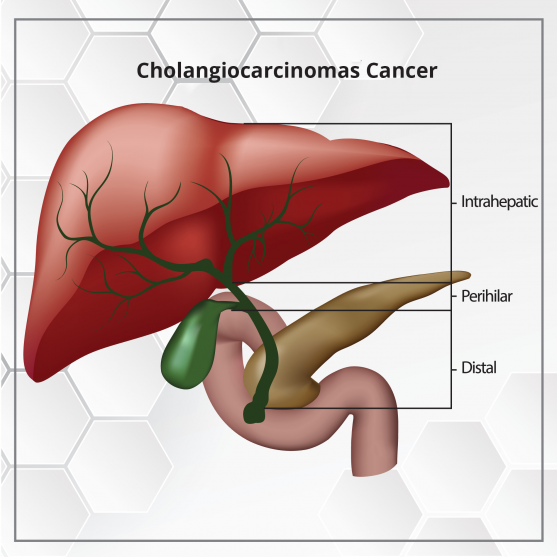 Depending on where the cancer occurs in the bile ducts, the following are the common types of cholangiocarcinoma:

Who is more likely to get this type of cancer?

The exact cause of bile duct cancer is unknown.

People with the following factors may have a higher risk of developing bile duct cancer:

What are the symptoms of cholangiocarcinoma?

Bile duct cancer is asymptomatic unless the bile duct is blocked.

Depending on the type of bile duct cancer, the following can be some of the symptoms:

These symptoms can also occur due to other, non-cancerous reasons. You will need to  consult a doctor to know the exact reason for your symptoms. 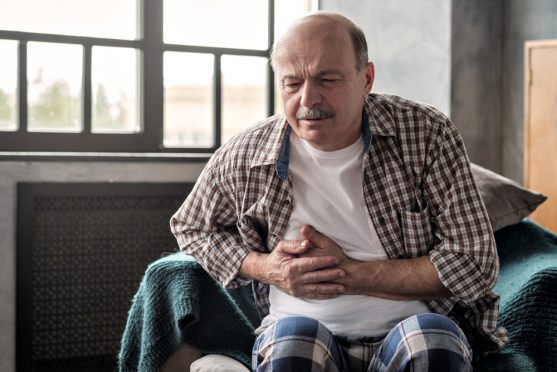 How is this type of cancer diagnosed?

The skin and the white part of the eyes (sclera) will be checked for jaundice.

If symptoms and the results of the physical examination suggest the possibility of bile duct cancer, then the doctor will advise tests to confirm it.  These could include blood tests, scans, and other procedures.

You might be asked to go for these tests:

The doctor may also advise tests for albumin, liver enzymes (alkaline phosphatase, AST, ALT, and GGT), and certain other substances in your blood. These tests are commonly called as a liver function test.

If levels of these substances are higher, it might point to blockage of the bile duct. However, it doesn’t confirm if it is due to cancer or some other reason.

Also, not all bile duct cancers make these tumor markers. A normal level does not mean cancer is not present.

Your doctor may recommend these scans:

This is often the first scan done in people who have symptoms such as jaundice or pain in the right upper part of their abdomen.

A CT scan  may help  diagnose bile duct cancer by showing tumors in the area and also help with the staging of the bile duct tumours.

It is a special type of MRI and a non-invasive alternative to ERCP, which does not involve the use of an endoscope or an IV contrast agent, and is performed to obtain the detailed image of the bile duct.

ERCP is an important diagnostic procedure for cholangiocarcinoma, and involves endoscopic evaluation of the bile duct system. A doctor passes a long, flexible tube (endoscope) down your throat, through your stomach, and into the first part of the small intestine.

A contrast dye is usually used to improve the visualization of the anatomical structures involved. The procedure can be used to obtain biopsy samples.  In some patients, where a blockage in the bile ducts is found, a stent may be placed during ERCP, to relieve the obstruction.

In this procedure, a sample of tissue is collected and examined in the laboratory to determine any abnormalities. A biopsy can be performed during ERCP if any suspicious lesion is found.

What does stage mean?

Bile duct cancers can be classified in two ways, based on the purpose:

The TNM classification used to stage cancers into stages I to IV is a complex staging for bile duct cancer.

Here, we will classify the cancer in a simpler way by classifying each cancer into 1 of these categories. The medical team will plan the best treatment strategy based on these stages.

Based on whether or not the cancer can be removed (resected) with surgery, it is termed as

How is cholangiocarcinoma treated?

Depending on the type, stage, and overall health of the patient the following are the treatment modalities for bile duct cancer:

The following are the common surgical procedures for resectable cancers, depending on where the cancer is located:

Along with the bile duct and nearby lymph nodes, the surgeon removes part of the pancreas and the small intestine. This operation is called a Whipple procedure.

Like the other operations, this is a complex procedure that requires an experienced surgeon.

When the cancer cannot be removed with surgery, certain surgical procedures may be considered to relieve cancer-related symptoms, such as jaundice, caused by blockage of the bile duct.

These procedures do not treat cancer, but improve the patient’s quality of life.

Stent is  a small metal or plastic tube that’s put in the blocked duct. This is done to keep the duct open, to allow bile to drain into the small intestine.

A stent is usually placed as part of either ERCP or PTC ( Percutaneous transhepatic cholangiography) procedure. Most commonly it is done during ERCP.

A bypass is done to relieve the obstruction, thereby reducing symptoms such as jaundice or itching.

Chemotherapy can be given orally or through an intravenous route.

This therapy is given:

The following are the common chemotherapy drugs that can be given alone or in combination to treat bile duct cancer:5-fluorouracil (5-FU), Gemcitabine, Cisplatin, Capecitabine and Oxaliplatin.

It uses specific drugs to target specific genes or proteins of cancer cells that contribute to their growth. This therapy is recommended in the advanced stages, when surgery is not an option. For example- Pemigatinib, an FGFRs (fibroblast growth factor receptors) inhibitor is used to treat bile duct cancer.

Immunotherapy involves the usage of certain medicines to boost a person’s immune system to identify and destroy cancer cells.

Can cholangiocarcinoma be cured?

Survival depends on many factors like the stage of cancer, the treatment options and the level of fitness.

Life expectancy for bile duct cancer is often expressed in five-year survival rates, which indicates what percent of people live at least 5 years after the cancer is found.