The Truth About Sugar, Cancer and Project 259 – What They Have Been Hiding Since 1965

According to sources at CNN, the sugar industry actively organized a research to study the effects of Sugar on Cancer, and then suppressed its results in the 1960s. 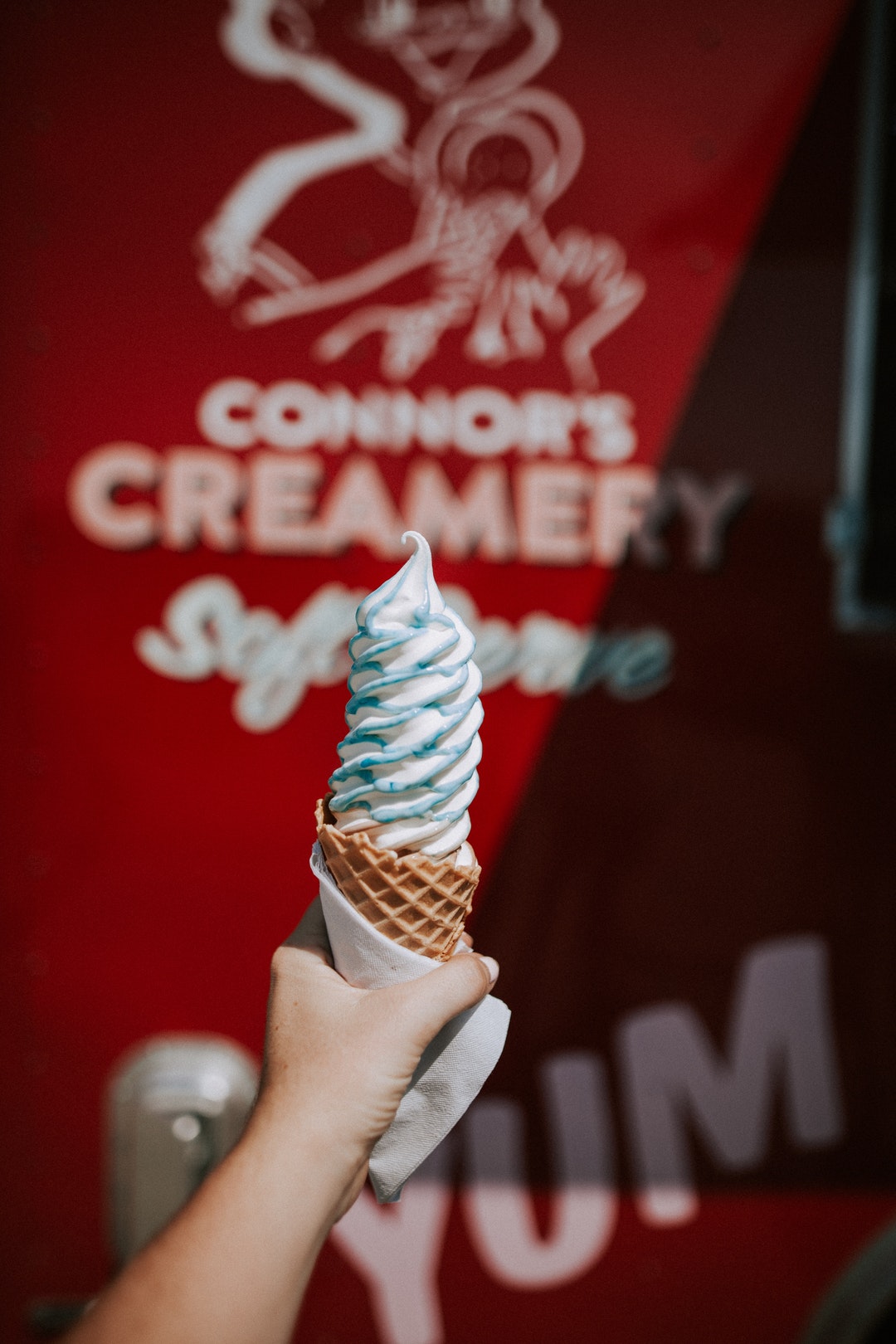 Stanton Glantz, a UCSF (University of California, San Francisco) professor has co-authored a PLOS Journal paper that revealed the origins of this research as it was originally organized. In 1965, the Sugar Research Foundation (SRF) secretly funded a review in the New England Journal of Medicine that discounted evidence linking Sucrose consumption to Hyperlipidemia, Coronary Heart Disease and Cancer.

This article is based on facts that were first published on CNN Edition.

Sugar vs Fat – An ongoing battle

The sugar and fat industries have constantly been at war, each trying to outsmart the other in terms of defining causalities associated with serious health conditions such as Diabetes, Cholesterol Disorders,Heart Disease and Cancer. In November last year, the PLOS Journal of Biology unveiled the results of a study sponsored by the Sugar Industry to study the links between a high-sugar diet and high blood cholesterol levels and cancer in rats.

The results of this study were never published. 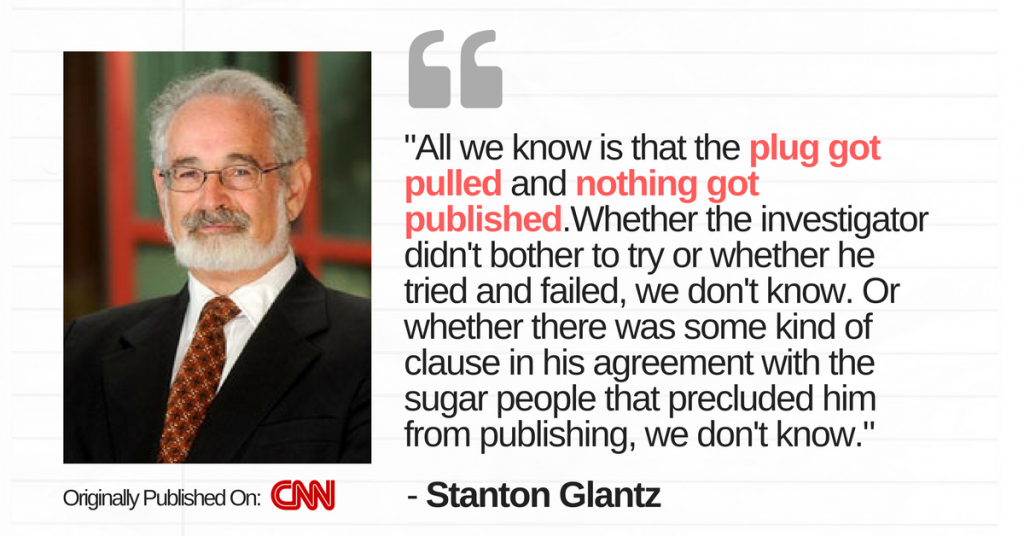 According to the new paper, the Sugar Industry (then represented by an organization called The Sugar Research Foundation) tried to get ahead of the game by self-sponsoring scientific research into the subject of links between Sugar and serious diseases, and then manipulating/withholding results to shift the blame on other contenders for unhealthy dietary inclusions, such as fat.

JAMA Internal Medicine published an analysis some time back, explaining how the Sugar Research Foundation had also sponsored a research program that aimed to overshadow the health hazards of a high-sugar diet, promoting fat as the main culprit instead. 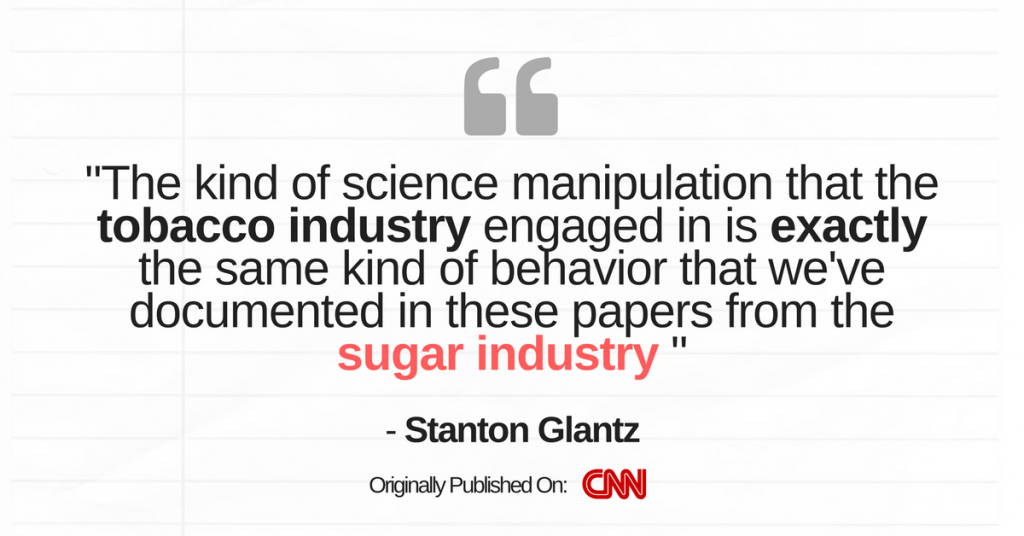 Retrieving the truth – What the sugar industry has to say

The erstwhile “Sugar Research Foundation” is now called the Sugar Association. They have actively contested the new PLOS Biology paper, and their lobbyists have argued with CNN that the journal “is not exactly a study”, but a perspective. They have countered that the journal is based on speculations and assumptions about five-decade-old events, conducted by known critics of Sugar. This does not come off as a great scientific argument.

“We don’t know what would have happened had this study come out differently and showed no effect of sugar. I would bet that it would have been published, and they would be thumping the drums about it.” – Stanton Glantz

Facts That The ‘Cover-Up’ Aimed To Hide: Project 259 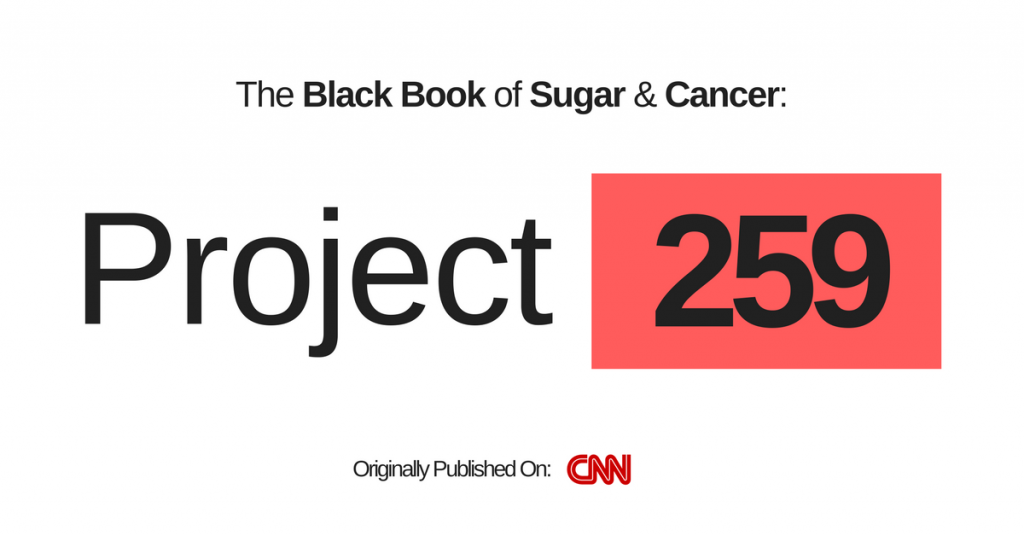 The truth about Project 259 was brought to light by the paper’s lead author Cristin Kearns (an Assistant Professor at the UCSF School of Dentistry). Kearns studied multiple letters of correspondence between various scientists and executives at the (former) Sugar Research Foundation between 1959 to 1971, and maintains that this is where she first learned about the results of this long-lost study.

Cristin’s curiosity, supplemented by visits to various public libraries led her to discover a book that was published by the Sugar Research Foundation. This was a book that enlisted all of the SRF’s research projects between 1943 and 1972, but it did not contain any “publications” (summary reports publishing the findings of any research project). This raised Cristin’s inquisitiveness.

This book was called Project 259. Spoiler alert: It is equally shocking and scary to note that findings of this scale have been safeguarded from the public eye for so long.

According to Project 259, the Sugar Research Foundation authorized all of 15 months worth of funding to the Sugar-vs-Cancer study between June 1968 and September 1969. Kearns also learned in the book that the funding (which was discontinued by SRF), if continued, would have resulted in the publication of data that was extremely unfavorable to the commercial interests of the Sugar industry. 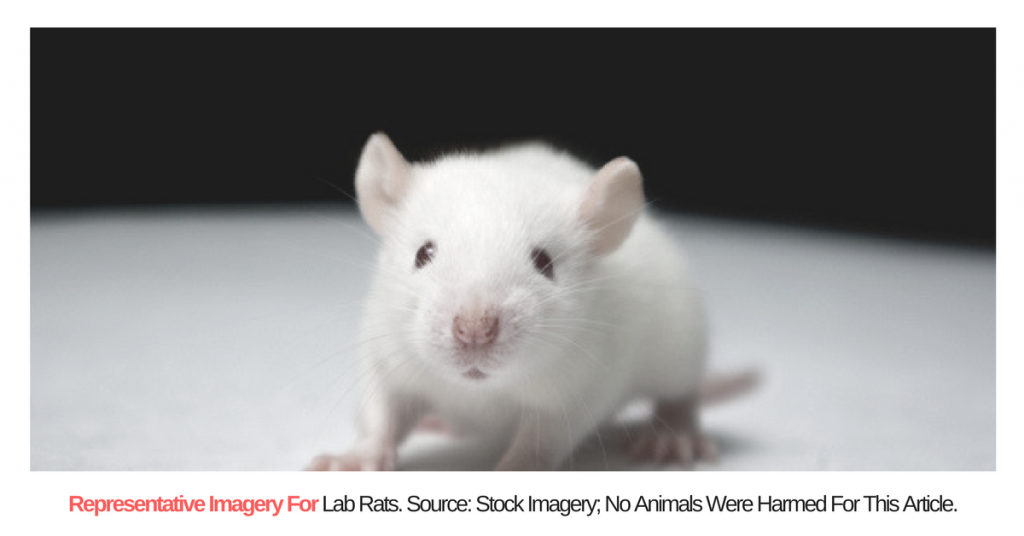 Beta-glucuronidases are enzymes that catalyze the breakdown of complex carbohydrates in the human body. They have also been associated with an increased risk of Bladder Cancer.

Project 259 reveals that the urine of rats fed a high-sugar diet had higher levels of Beta-glucuronidases than the urine of rats fed a basic diet (high in starch). Revealing this information back in 1965 would have been detrimental to the Sugar industry, due to a US government policy restriction called the “Delaney Clause”. The US Congress passed this clause in 1958 to stop the approval of any food additives which could induce Cancer in humans or animals.

“There was something called the Delaney clause, which said the FDA was supposed to keep carcinogens out of the food supply even if they were animal carcinogens.” – Stanton Glantz

Project 259 says that high-sugar-diet rats underwent a statistically significant decrease in their triglyceride levels, and there was a major reduction in the count of bacteria in the guts. Such bacterial colonies are known as the Gut Microbiome.

Recent scientific interest and new studies have revealed that Gut Microbiomes play a key role in determining how the human body responds to cutting-edge Cancer treatments.

This article (published in ScienceMag), explains the link between gut-microbiome bacteria and the response to Immunotherapy treatments.

Why was it “almost criminal” to hide these findings in 1965

Dr Sanjay Basu is an Assistant Professor of Medicine at Stanford University. He was not directly involved in the PLOS study. But he has been involved in analyzing the impact of the original research referenced by the paper’s authors, and maintains that the findings hinted at ‘ethically concerning’ acts by lobbyists.

Because of misleading dietary guidelines, there was a trend among urban populations to replace potentially harmful, high-fat foods with seemingly harmless high-sugar edibles. 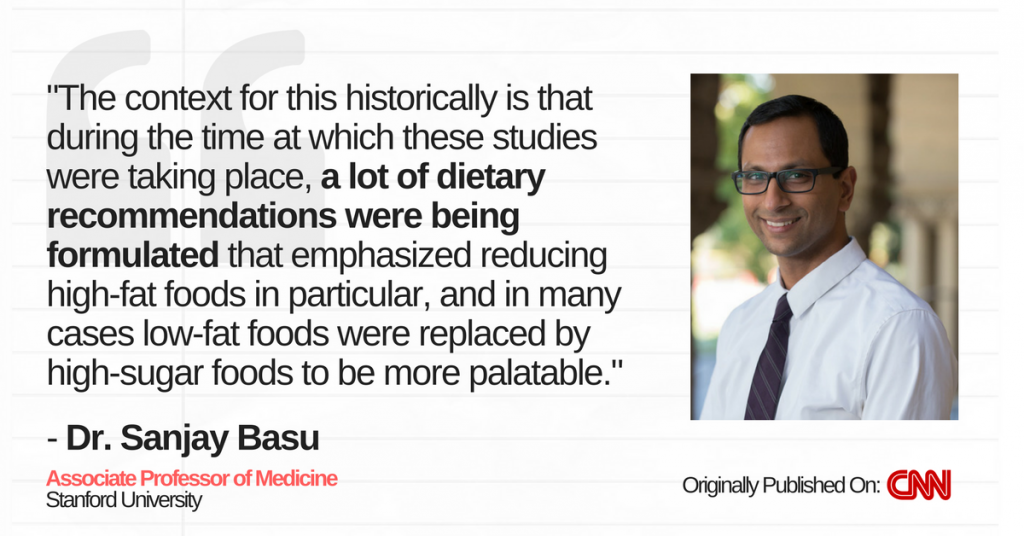 According to Dr Basu, “…the fact that sugar was not being considered an additionally concerning substance unfortunately led to a lot of changes in the American diet, that correspond to a rise in Obesity and Type-2 Diabetes. So the suppression of this type of study is partly greatly concerning because of the time in which it took place.” 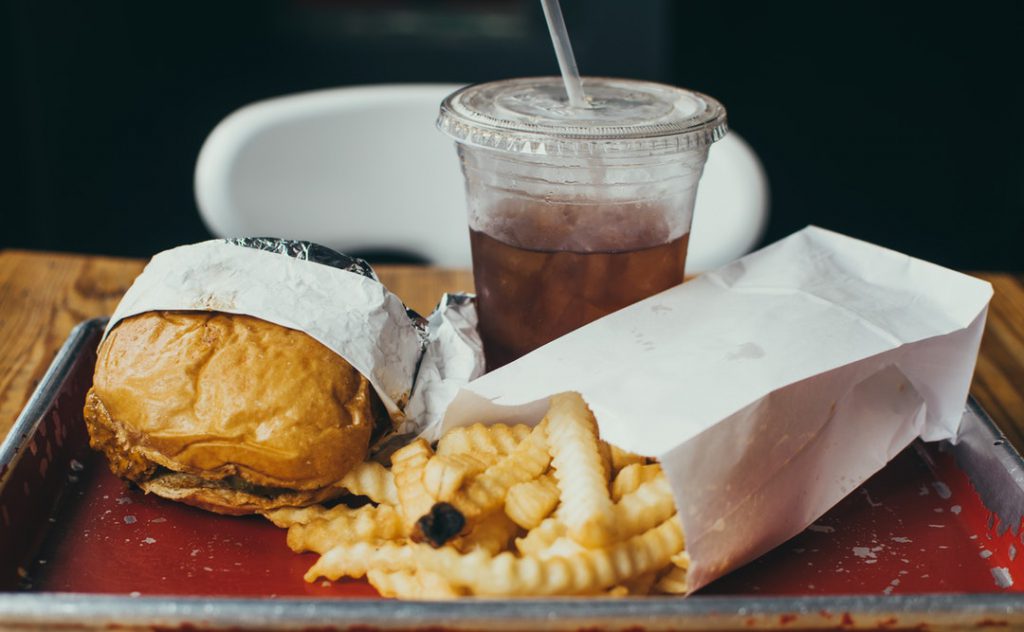 He further goes on to state that it is highly unclear on what constitutes a “safe amount of added sugar” today. He suspects that we are all above what might be considered as reasonable consumption.

Our prerogative as consumers

Representatives of the Sugar Association have responded to CNN with extreme diplomacy and caution. They have attributed the suppression of their findings to three reasons: (Quoted verbatim)

As is the case with any public dietary recommendation that has massive repurcussions, this battle, too, will be long-drawn and filled with interjections from both sides of the table.

As for consumers who wish to avoid Cancer, the decision still rests with us on how we choose to interpret the ‘allegations, revelations and defence’.

Further Reading: These Dietary Habits will SLASH your Cancer Risk and SLAY your Restaurant Bills!

Found this article helpful? Share it on your social feeds with your friends, family and loved ones. Send it on your Family WhatsApp group, maybe!  But most of all, give us your feedback!

Note:This is an employee-authored column, and the opinions expressed herein rest solely with the author (Shomprakash Sinha Roy). They are not representative of the opinions of Onco.com as an organization.

Can Cancer Be Transmitted Sexually?

Why Do Celebrities Head West for Cancer Treatment?

The Diary of a Cancer Fighter: Mehul Vyas...